Ada spent several years working for design companies before deciding that she preferred doodling. She lives in Brighton with her daughter and cat, Ming the Merciless. She collects picture books, draws in her studio (which is very messy) and loves cheese and spaghetti, especially together.

Poo in the Zoo: The Island of Dinosaur Poo  (Little Tiger Books)

Book Trailer for Poo in the Zoo: The Island of Dinosaur Poo

The bestselling Poo in the Zoo picture books have young children laughing out loud, and now there's a new adventure that sees Bob and his friends journeying to The Island of Dinosaur Poo, on the hunt for a particularly elusive poo....! We asked illustrator Ada Grey to tell us more about the new book, written by Steve Smallman, the challenges in creating these picture books - and why children find them so funny!

1.   How did you become a children's book illustrator?

I was incredibly lucky to have grown up in a family that ran a bookshop, so I was surrounded by books from the start. I absolutely loved them, and there are two that had a life-path setting effect on me: 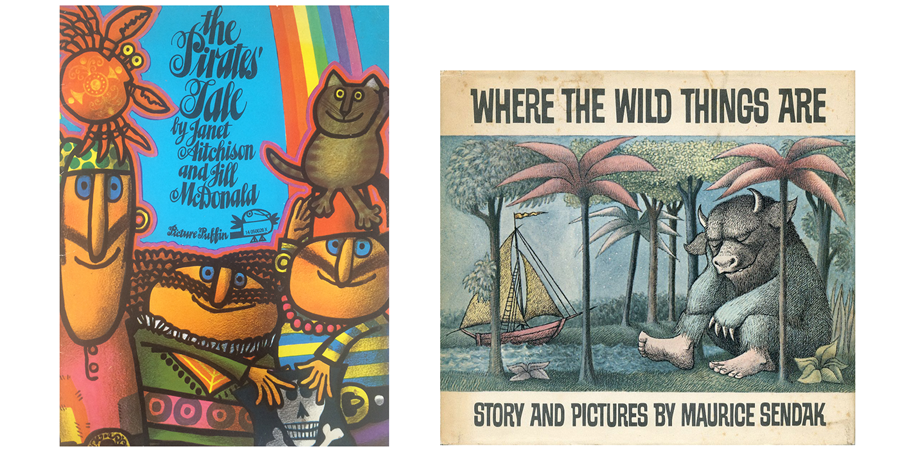 The first was The Pirates' Tale, written by Janet Aitchison and illustrated by Jill McDonald. Janet was only five and a half when she wrote it, and it has me in fits of laughter to this day.  The second was Where The Wild Things Are by Maurice Sendak.

That's when I realised that someone wrote those words, and drew those pictures, and that doing that could be a job. That was it. I knew that that was what I wanted to be.  I used to spend hours making little books. I remember being completely and utterly absorbed, nothing else existed when I read or drew, and it's still the same today.

2.   Why did you want to illustrate the first Poo in the Zoo book?

I first came across Steve Smallman's work when I bought Smelly Peter, The Great Pea Eater for my daughter.  It made her hoot with laughter and we read it on repeat for about three years.  To end up illustrating such a fabulous series for him is a perfect circle!

3.   How did you decide on the 'look' of the book and characters? 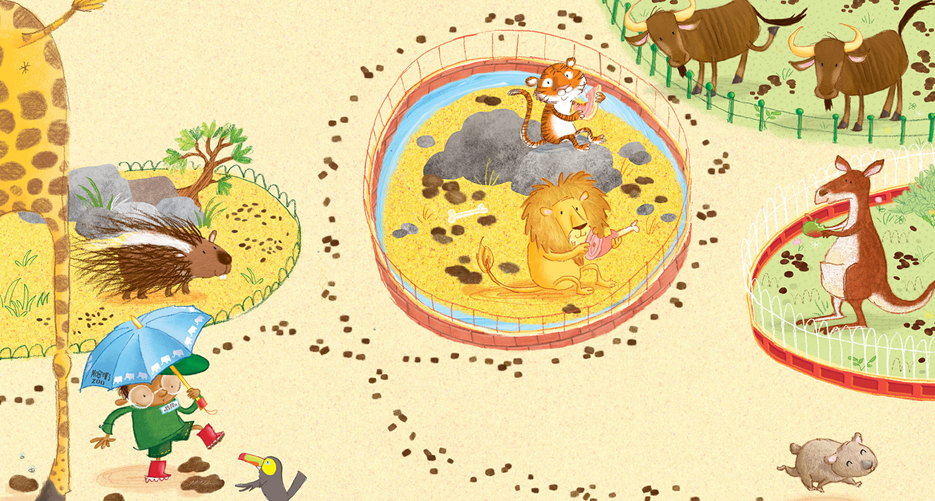 Bob came first, and needed to be a child, smallish, yet practical and capable of running the zoo, like all kids can in their imaginations.  So he got a zookeeper's uniform, but his hat is just a little bit too big for him. I think his grown up bought it thinking it'll last longer that way. He'll grow into it!

Being a parent, I've visited zoos over the years of course, so most animals come from memory, but I did have to do a bit of research and get reference for Wombat and Iguana for example, and of course, as much reference for the types of poo different animals produce! Stylistically though, the look just came out in the way that I draw, I can't help it!

4.   How do you create your illustrations? 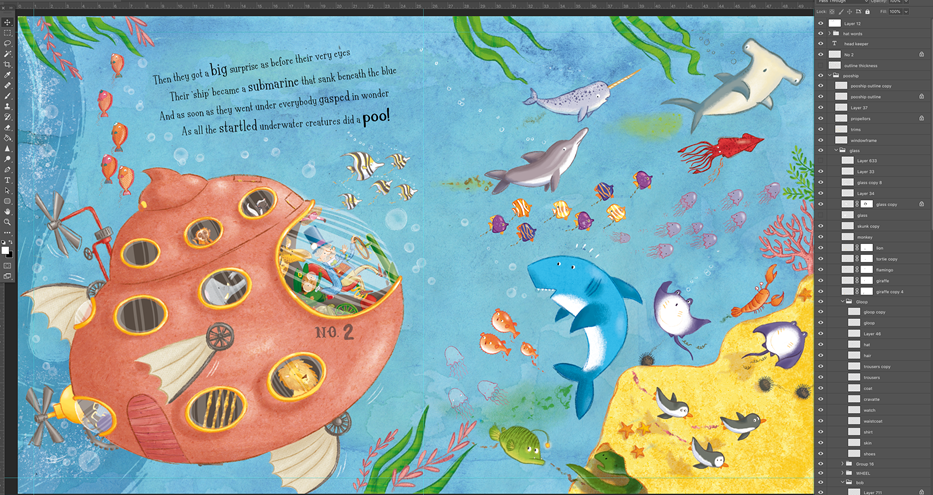 It's quite a long-winded process! I used to draw my illustrations on paper and scan them in, but as digital pens and brushes have improved over the years, I now sketch on my iPad using Procreate, which I love.

I create the textures by painting things, scribbling, scratching, smudging, and splattering with paints, pens and pencils. I photograph textures and fabrics, and then scan them all in and squish it all together in Photoshop. A double page spread can take up to five days to do and has dozens and dozens of layers!

5.   How important is it that you keep to the original style from the first book, for example with the covers?

Keeping a similarity to the look of the covers, and everything inside looking consistent, means that the books can be easily identified as a series and the Little Tiger editorial and design team are super at this!  If a child has enjoyed one book, they can see that another is about the same world, and that they could enjoy more of the characters that they connected with.  Joy promotes engagement and curiosity, and therefore, the process of learning to read without even realising that it's happening.

6.   Why do you think children enjoy these stories so much?

I think because it's naughty and fun saying POO!  Toilet humour has been recorded as far back as 1900 bce and most kids go through a phase of fascination with it.  I think kids can identify with Bob too - his world is slightly chaotic but fun, and it would be great to be friends with so many animals!

7.   Is it hard to make the books look 'scientific' as well as funny?

I have had to do a fair bit of research actually!  Kids are very well informed about things that fascinate them, so I knew that I needed to have a degree of accuracy. Did you know for example, that the Bare-Nosed Wombat’s poo is cubed and they do up to a hundred poops a night?!

The biggest help for drawing The Island Of Dinosaur Poo, came when I was investigating coprolites (the proper name for dinosaur poo). I found an amazing picture called the Duria Antiquior By Henry De la Beche, painted in 1830 from research done by Mary Anning. If you look carefully, you can see two of the dinosaurs are pooping! It's the perfect mixture of science and silly!

8.   What were the challenges in illustrating The Island of Dinosaur Poo, and do you have a favourite spread?

The pacing of a book usually takes a fair bit of working out, when to have an expanded view to offer loads of visual information, and when to close in or simplify an image, to focus the attention or create drama or a cosier atmosphere. The first stage of putting a book together, is doing thumbnail sketches of all of the spreads together to plan this out. 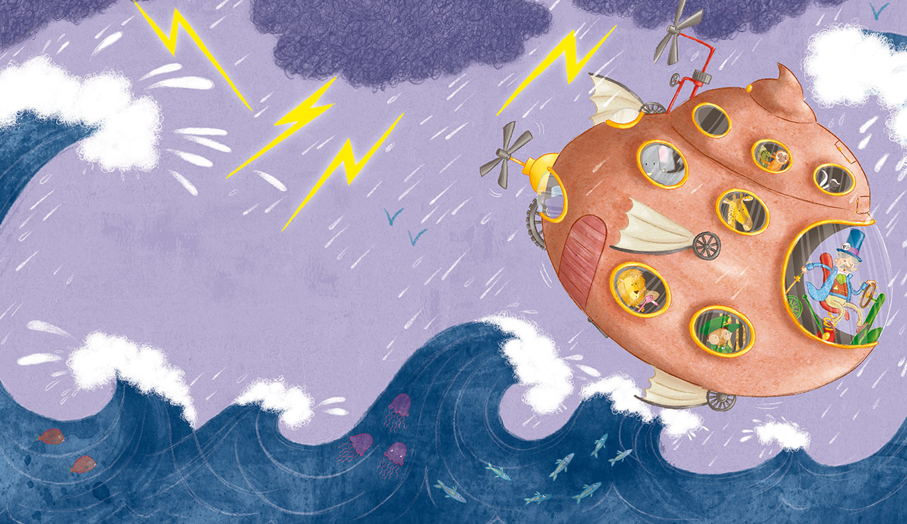 One of my favourite spreads is the storm. It's dramatic and has that - oh no! What's going to happen?! - page turner element to it. I loved doing the endpapers too, because I got to make up silly dinosaur poos, which amused my childish sense of humour! 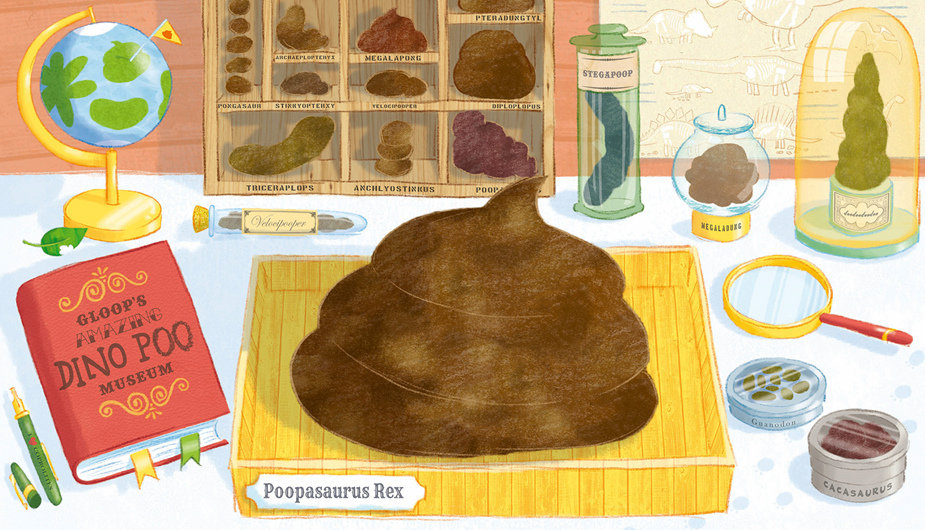 9.   What other kinds of books do you enjoy illustrating?

Humour really seems to be my thing, I've done gentler stories, but they always have an element of humour in them somewhere.  I loved doing Hippobottymus for Little Tiger, another of Steve Smallman's texts but for slightly younger kids. Funnily enough, it's also bottom based, so there definitely seems to be a theme here!

10.   What do you enjoy doing to relax when you're not in your studio?

My most favourite thing is gardening. I find it incredibly relaxing and it's now been found that the microbes you breathe in when digging the soil promote the production of serotonin, so it's literally my happy place!