Cat Weldon writes funny books for children and is a little bit obsessed with Vikings - hence her new series which begins with How to be a Hero.

She has an MA in Scriptwriting, and a background in children's theatre, and spent ten years working as an English and Drama teacher - and has had lots of other jobs where she can talk while waving her hands around wildly.  Having grown up bouncing between the UK and USA, Cat Weldon now lives in East Anglia with her husband, daughters, and collection of delinquent chickens.

How to be a Hero (Macmillan Children's Books)

1. In one sentence - what is your new book, How to be a Hero (Macmillan Children's Books), about?

How to be a Hero is a funny, adventure-filled story which follows Whetstone - a thief, and Lotta - a trainee Valkyrie, as they bicker their way through the Nine Worlds of Norse Mythology.

2. When did you first discover Norse myths and what drew you to write about them?

I have always loved myths and still have a book of Norse legends which I was given when I was about seven years old. I find the stories fascinating as they allow me a glimpse of a world which is so strange but also very familiar. The Norse Gods are quite self-centred and are mostly interested in sorting out their own problems and having their own adventures, which makes them very appealing characters to write about. Also - dragons!

3. Where did you go to research the Vikings and their beliefs?

My favourite place to visit when I was a child was the local museum which has an exhibition of Anglo-Saxon and Viking artifacts, many of which were discovered locally. When writing How to be a Hero, I found it really useful to go back and revisit these objects as they helped bring the Viking world to life for me in a physical way. How heavy is a sword? What does Viking food taste like? How do you throw an axe? There's one way to find out...

I also did lots of reading to remind myself of the main stories and characters. Interestingly, a lot of the most exciting information came from little throwaway comments rather than the big stories, 'What was that about flying shoes?' or 'He ate what?'

I know so many facts! My favourites are that Vikings invented the roast-battle, called flyting it was a poetic exchange of insults and the winner would get a large cup of mead!

Vikings also believed in a boat called Naglfar which is made of dead men's toenails. I like to imagine a fed-up Viking mum, trying to get her children to trim their toenails and warning them that if they die with long toenails Naglfar will get bigger!

5. Whetstone, your main character in How to be a Hero, isn't a promising hero in the making, especially for a Viking. What was the Viking's idea of a hero, and how does Whetstone fall short of this? 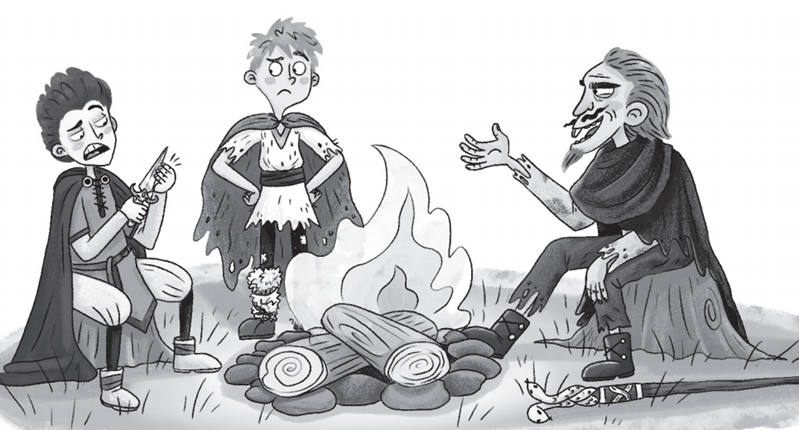 The Vikings admired people who were brave, strong and straightforward. Any signs of trickery or deceit were seen as very suspicious. Whetstone is not a good fighter and his natural sneakiness would have made it difficult for him to do well in Viking society. He also gets seasick, which wouldn't be good on the long sea voyages the Vikings are famous for.

6. Whetstone's sidekick is Lotta, a Valkyrie in training - what is a Valkyrie, and why did you choose her for this story?

Valkyries are special servants of Odin. It was their job to fly over battle sites, collecting the best warriors to bring back to Valhalla - a Viking's idea of paradise.

Most of the Norse Gods are not that interested in the day-to-day lives of humans, so Lotta acts as a link between the world of the Gods and the living humans below. She desperately wants to do well at her job, but unfortunately she doesn't always think things through...

7. There's also a magical, and very chatty, cup. Is that based on a Norse myth? Would you bring the cup home if you were offered it?

The cup itself is not based on any one particular myth, but there are plenty of enchanted objects in Norse Mythology from swords to rings and even magical boats. The idea for the talking cup came from the Viking's love of poetry and riddles. I would be tempted to bring the cup home, but only if it promised to behave itself!

8. Readers get to meet some of the Viking gods during Whetstone's adventures. Which god would you choose to meet? Or is it best to steer clear of them all?

The Norse Gods are like us, but magnified by about a thousand. There is a story about Thor and Loki having to disguise themselves as a bride and bridesmaid to get Thor's hammer back from the giants. I would be pretty interesting to be at that wedding to see how convincing their disguises were, although I would want to get out of the way pretty quickly when Thor got his hammer back!

9. What have you got planned for Whetstone and Lotta?

We've only visited two of the Nine Worlds so far, I'd love to explore what Whetstone and Lotta could get up to in the other seven!

10. Where do you write the How to be a Hero books? If you had a 'writer's shed', what would it look like?

I wrote most of How to be a Hero, sitting at the dining room table, I've now progressed to an actual desk which I don't have to keep clearing so that we can have dinner!

I think best when I'm moving around and can be guaranteed to come up with a good idea as soon as I'm nowhere near a pen and a piece of paper, so I guess my perfect writers shed would have to be in a giant circle so I could keep walking around and around!

11. What do you think of the illustrations? Any favourites?

I love the illustrations! My favourites are the map of Yggdrasil (the world tree), as each of the world's have their own distinct personality. I also love the image of Lotta as a bird, it makes me laugh every time I see it!

12. What do you do to relax when you're not writing?

I love to make things and usually have a project (or two) on the go at any one time. I've been doing quite a lot of knitting and am building up to knitting myself a horned beanie hat with Viking beard!

How to be a Hero   (Macmillan Children's Books)

Look out for Vikings, Norse gods - and dragons! - in this action-packed, hilarious new series for ages 8+ by author CAT WELDON.