Rex Dinosaur in Disguise is the brilliantly funny novel for younger readers from Elys Dolan, who makes picture-books about everything from seagull detectives to capitalist bunny rabbits and weasels plotting world domination.

Rex Dinosaur in Disguise is a brilliantly funny new series for younger readers from Elys Dolan, who tells us why she was tempted to create a series about an ordinary town with some extraordinary inhabitants, including a dinosaur, Big Foot and a dodo!

Download a chapter extract from Rex Dinosaur in Disguise

1. What kinds of books do you like creating? Had you always planned to be an illustrator?

I like to create the kind of books I'd like to read, which are usually a bit bonkers with plenty of funny bits. This doesn't mean the books can't talk about important stuff, funny isn't the opposite of serious.

I hadn't always planned to be an illustrator. When I was about 5 I wanted to be a high court judge, but that didn't quite happen. When I went off to art school, I wanted to be a serious artist but after discovering that I enjoyed reading the children's books in the gallery gift shop more than looking at the art, I thought a career change was in order.

2. Would you describe yourself as an author or an illustrator first?

Definitely illustrator. I always found words a little scary, probably because I'm dyslexic, and I felt more comfortable doing pictures. But when I did the MA in Children's Book Illustration at the Cambridge School of Art it became clear to me that if I was going to draw the kinds of things that I wanted to I'd have to write the stories too.

3. Can you tell us a bit about Rex: Dinosaur in Disguise?

This is the first book in the Rex series. It all starts back in prehistoric times when Rex was king of the dinosaurs, he had it made. But, after getting frozen in a pesky ice age for several million years, he defrosts and finds himself in a modern-day city. The city is full of new dangers, not least humans who would put a creature like Rex in a zoo before he could blink. Lucky for Rex, he's not the only creature hiding in this city. Bigfoot, Nessy and a dodo who runs a small fast-food empire help Rex to disguise himself as human and stay undercover. This works fine until Rex arouses the suspicions of his neighbour, 9-year-old Sandra Shellman, and faces his biggest challenge yet, finding a job. 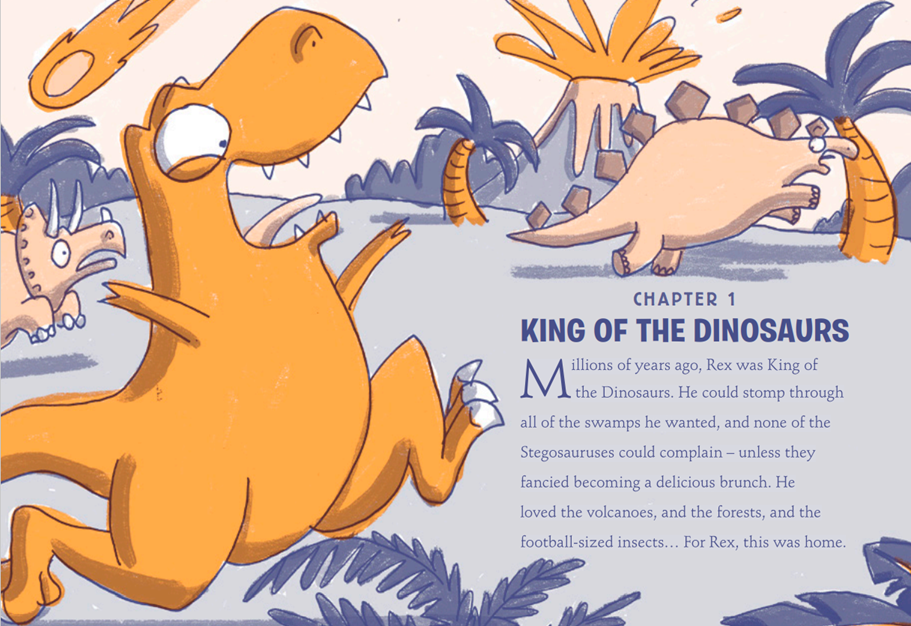 4. What gave you the idea for writing about strange creatures dressed as humans?

I love a good mystery, and the idea that there's creatures living on this planet that we might not know about, or only suspect exist, fascinates me. If people are busy searching for these creatures sometimes the best place to hide is right under our noses, so I wanted to explore the idea of how these creatures might blend in with us humans.

5. How did you decide which legends / creatures to have in the story?

There's a few of these legends that seem iconic to me, like Bigfoot and the Loch Ness Monster, that I definitely wanted to include. Along with these I like the idea that extinct creatures might not be as extinct as we think they are, but their near miss means they might have more sense than to let the humans know they're still around, which is why I included a dodo and a dinosaur. In future books I would like to include a few lesser known legends. For instance, did you know that Nessie isn't the only lake monster? There's another called Morag who lives in lake Morar in Scotland. 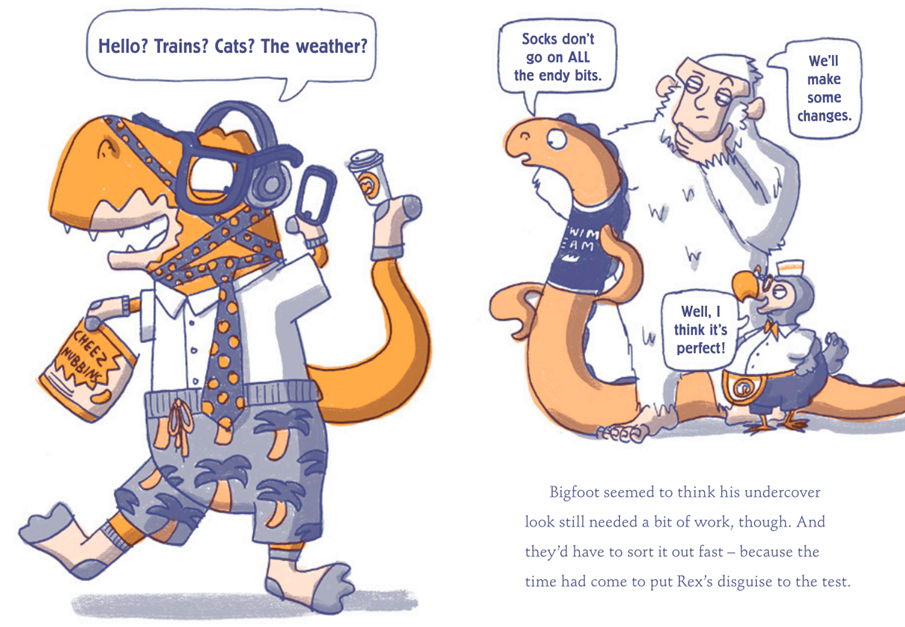 6. Which was the most fun one to draw?

Probably Bigfoot. He's so hairy and I love all his very serious expressions.

7. If you saw a human for the first time, what would you find most odd about us?

The fact that our hair is very patchy! All those animals with fur have it all over, we just have it in odd spots. Also, ears are super weird. Spend a while looking at one of yours and it'll start to freak you out after a bit.

8. Which moment in the book made you laugh the most?

I loved drawing the bit where Rex pretends to be a celebrity chef named Raymond Le Bleu and it all goes horribly wrong. Possibly my favourite illustration in the book is where he's dressed as a chef and realises he's on TV. 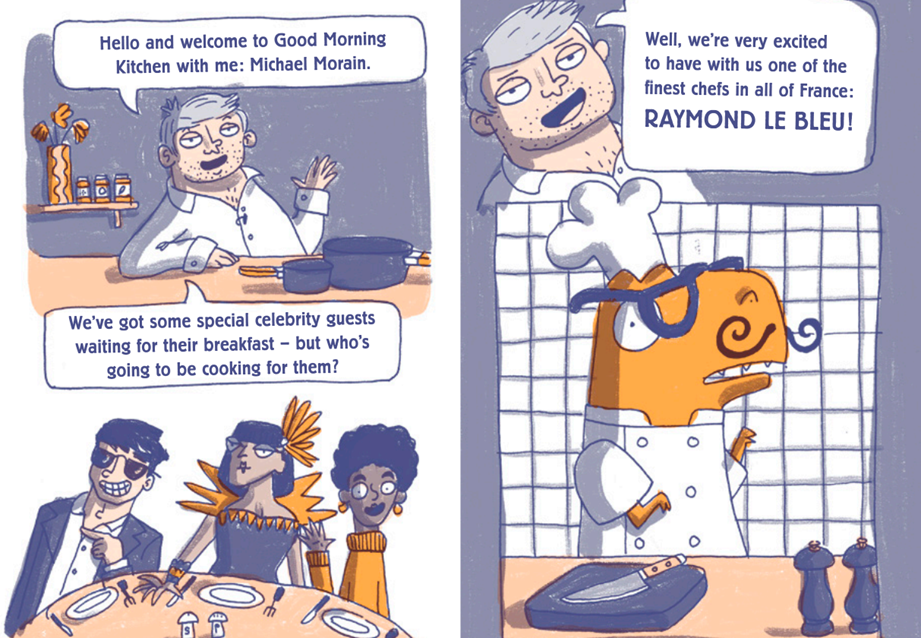 I start drawing when I first start writing the book. I can't sit there with an open word document and write the words first. To get ideas for what will happen in the story and work out how characters will react, I have to draw them.

When it comes to making the finished illustrations, I draw the outline in fountain pen and then scan those into the computer and turn them blue. I then add the tone digitally in Photoshop.

10. What's next for Rex and his friends?

Well, it stands to reason that if there's a dinosaur, yeti, lake monster and a dodo living in the city, then pretty much anything else could be too. There're other undercover creatures for Rex and his friends to discover. Plus, Rex might better understand the human world, but the humans don't quite get him yet, which is going to cause a spot of bother. 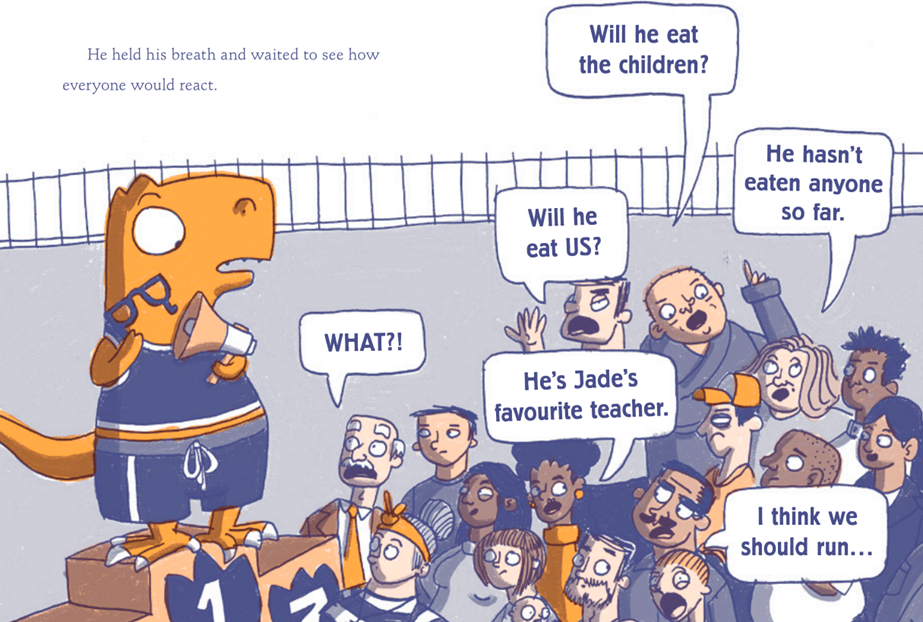 11. What are you writing currently?

Not much! I had a baby three months ago and I'm currently on maternity leave. During naptimes though I am tinkering away on Rex 2…

12. What kinds of books do you enjoy reading?

I do like a bit of supernatural mystery. At the moment I'm reading The Stranger Times by C.K. McDonnell, about a newspaper that charts supernatural goings-on. I also love a highly illustrated book, like Katherina Manolessou's Look for Ladybird series.

13. If you could draw your own studio into existence, what would it look like?

It would definitely be some kind of tree house, with multiple floors and a lot of ornate woodwork. There'd be a tower involved. Inside, there'd be infinite space for art materials, an orangutan butler who would make tea and give me compliments and a talking fox who's trained as an accountant to do my tax returns.