Geraldine McCaughrean was born and educated in Enfield, North London, the third and youngest child of a fireman and a teacher. She attended Christ Church College of Education but instead of teaching chose to work for a magazine publishing house. She became a full time writer in 1988.

Since then, Geraldine has written over 180 books and plays for both adults and children and is one of today's most successful and highly regarded children's authors. She has won the Carnegie Medal twice, in 1988 and 2018, the Whitbread Children's Book Award (three times), the Guardian Children's Fiction Prize, the Smarties Bronze Award (four times) and the Blue Peter Book of the Year Award. In 2005 she was chosen from over 100 other authors to write the official sequel to J. M. Barrie's Peter Pan. Peter Pan in Scarlet was published in 2006 to wide critical acclaim.

'I took up writing as a child, for the fun of it,' says Geraldine, 'to go somewhere else and be someone other than me. It's still my chief pleasure, and the thing I want children to get from my books. If writing ever became more laborious than that, then I don't think anyone would enjoy reading what I wrote.'

Discussion Notes for The Supreme Lie

The Supreme Lie is set in a land devastated by flooding and is a powerful story about courage, power and propaganda.  We asked award-winning author Geraldine McCaughrean tells us more about her latest novel:

A catastrophic flood has engulfed the little country of Afalia. The river that runs its whole length has burst its banks and rain is still falling. In the walled capital city of Praesto, there's panic, even among those in charge. The formidable head of state, Madame Suprema, inexplicably catches a train north. She'll be back soon... won't she?

Her downtrodden husband covers for her as best he can by getting the housemaid Gloria to impersonate his wife - just for a little while. Thus Gloria finds herself Ruler of all Afalia … and way out of her depth.  Meanwhile, those outside the city wall are struggling to reach safety: people, wild animals, pets...

2.   What were the main themes you wanted to explore through the novel?

People react in different ways to disaster: some pretend it's not happening; some want to turn it to their own advantage; some help others; some just do as they're told ... In Afalia, the factories must be kept running at all costs: the nation's economy is relying on it!

So, I suppose my main theme is how disaster brings out the best and worst in people, as well as altering their lives for ever.

3.   Why did you decide to tell the story through the perspective of a teenage girl, Gloria, and a dog called Heinz?

Gloria's a servant - a nobody ... except that, of course, nobody is a nobody. As understudy to The Suprema, she finds she has strengths she has never been asked to use before. She knows what it's like to be poor and overworked - so she can empathise with the factory workers. And she's also seen the rich and powerful come and go.

Heinz gives us a glimpse of the world outside Praesto city. Separated from his human 'family', he is on a mission: to find his boy, Clem. On his way downriver, he meets with people and animals who behave not so very differently from the villains and victims in Praesto City.

4.   Why are the newspaper clippings from The Voice important?

The newspaper is important to the plot. It gives us a glance, now and then, at what's happening in the city, drops hints, pumps up the danger level, influences public opinion. The anagrams are actually clues of a sort for the reader - though it doesn't matter if you don't stay to solve them.  I love that the illustrator, Keith Robinson, captured the 1920s period style perfectly. It also serves to say, 'Look, we're not talking 21st century here.' 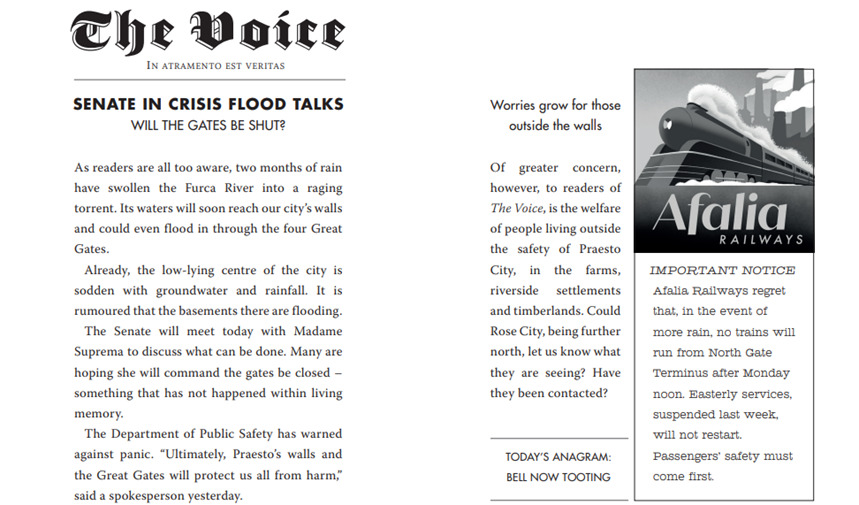 5.   What was it like following Gloria's progress, from maid to the person in charge?

I suppose the hero in a story is always a product of the author who put all those thoughts in her head and words in her mouth and decided her fate. But it's no good me just asking myself, "What would you do, Geraldine, in these circumstances?" I know the answer all too well: I'd be useless, hiding under the bed.

Luckily, heroes and heroines frequently start to behave independently and lend their own panache. 'Steering' a character is more like setting a splendid toy boat afloat, watching where it goes, and blowing now and then to save collisions.

I did set myself some tricky problems in constructing The Supreme Lie - Who's where? And when? And exactly who knows what secrets? But I'd rather get stuff down, then correct and rewrite, than plan everything down to the last detail; if I did that, I'd leave myself no room for a sudden idea, or for events and characters to surprise me. After all, I need to enjoy the ride at least as much as the reader!

6.   Where do you find your names of characters and places, or do they find you?

Firstly, I should say that the most important thing about names is that they all look different. Apparently, readers don't usually take in the whole of a name, just it's shape. It's the outline and length that matters when it comes to telling characters apart. So they must all be different shapes.

7.   How do your settings - here the cities of Praesto and Rose City - develop? Do you 'map out' your settings before you start to write?

Normally, if I'm going to set a novel somewhere I've never been, I'll research the flora and fauna, geography, traditions, history, beliefs ... But here, for the first time I was writing about somewhere imaginary, so I was free, as I went along, to invent everything about Afalia. Great fun. I can recommend inventing places. I did draw myself a map to begin with, but it had to shimmy a bit, to accommodate the plot!

8.   Dogs have a strong presence in The Supreme Lie. Were either Heinz or Daisy based on dogs you know?

Daisy is dozy and beautiful. She thinks about food, love, duty and, um... oh yes! - more food. Heinz is a mongrel, and mongrels often inherit, from their varied ancestors, sharp wits, bravery, a wiry fitness, and determination.

Daisy (my Daisy) was dozy, loving and lollopy. The only time she trod on an unseen pheasant which then collided with her mouth, she didn't know what to do. She was such a joy: she deserved to be immortalised in a book.

9.   There are some dark themes and moments in the novel; how do you keep it hopeful, and even funny at times, despite this?

Light and dark. You need them in life; you need them in art; you need them in writing. I don't want ever to leave my reader depressed. But I didn't feel I could tell a disaster story without bad stuff actually happening in it. At some points, I was glad to remind myself that the country of Afalia doesn't actually exist.

The relationship between Gloria and Timor is my chief source of comedy - them and perhaps Mycar, the brainless dog who 'owns' everything.

10.   What would you like your readers to take from The Supreme Lie?

Entertainment! Escapism! No life lessons, no virtuous moral. If, later, events in the real world now and then remind them of a book they once read, that would be just wonderful. 'Escapism' always sounds, somehow, like a bad thing - a 'cop-out'. But escaping the here-and-now is sometimes just what everyone needs. And it's cheaper than booking a holiday.

11.   How does writing The Supreme Lie compare with your other novels? Do any of your books stand out for you from your writing career?

The Supreme Lie was fun; its continuity and plotting were complicated, but I hope that doesn't show. I enjoyed the company of Timor, Gloria, Clem and the dogs very much. The best thing an author can say for a book is that they didn't want to write "The End", and I didn't.

I loved The White Darkness, because I don't think anyone else could have written it. Not because it's so very excellent, you know? But because they aren't me. It took me right back to my teenage years: the uncool girl, the gauche, day-dreaming fantasist. So, the heroine, poor girl, got saddled with a lot of my oddities - even my deafness!

... And there was Peter Pan in Scarlet, of course: a terrifyingly important commission which I won in a competition and which went on to sell in 50 countries. It was useful, since it was in aid of Great Ormond Street Hospital. You can't often say a work of fiction is useful.

But I can't remember any of my novels feeling laborious rather than fun. I have a hard time telling myself that writing is a job of work.

12.   How have you found writing during lockdown, and where is the first place you'll be visiting once it's over?

I was writing a new novel all the way through lockdown, and intensely happy - which sounds shocking when such dreadful things were happening all around. But writing is the ultimate jaunt into another time, another place, so in bad times it beats a nuclear bunker any day.

When I finished that book, lockdown depression closed in like a freezing fog.

I suppose I'll be out and about, talking about my book, but it's become a strange thought. Going places? What, further than Tesco? Won't I fall over the edge of the planet or be carried off by giant eagles?

13.   What are your favourite escapes from your desk?

Currently? Painting or sawing things in the garden. Needlework. Reading, of course. I write longhand, so sitting at my computer spotting scams, being pelted with ads, and having the wi-fi go off and on will never beat sitting somewhere comfortable, scribbling away at a play or a poem ... or a novel, of course - even if it will never see the light of day.

There's listening to loud classical music while making dinner. And with luck the ducks will soon come knocking at the door, asking to be fed. We have two resident magpies, this spring, too: "one for sorrow, two for joy".

The Supreme Lie is available now from all good bookshops (£8.99) and is aimed at readers aged 12+.