Melissa Harrison is an award-winning novelist and nature writer. Her books have won the European Union Prize for Literature, been shortlisted for the Costa Novel of the Year Award and longlisted for the Wainwright Prize for Nature Writing and the Women’s Prize for Fiction. She lives in Suffolk.

Melissa Harrison's By Ash, Oak and Thorn revisits the world of BB's Carnegie-winning story The Little Grey Men and brings fresh eyes to the world around us, inspiring readers to cherish and look after the natural world.  We asked Melissa to tell us more about her first novel for children:

1. You're already an established writer. Why did you want to write for children?

There's a single mission behind everything I write: to try and connect more people to the natural world, because I think it's so important - for our health, healing and happiness, and for the planet, which needs our care. That sense of mission means I'll try to reach as many people as I can, whether through novels, non-fiction, journalism, podcasting, and now children's books. Children are so important, and I really feel that the books you love as a child can change your whole life. If I can inspire in even one child a sense of curiosity and delight when it comes to nature, I feel I'll have done a good thing.

2. Can you tell us a little about By Ash, Oak and Thorn, your first children's book?

By Ash, Oak and Thorn was inspired by a book called The Little Grey Men, by Denys Watkins-Pitchford who wrote under the pen name of 'BB'. It won the Carnegie medal in 1942 and was followed by The Little Grey Men Go Down the Bright Stream.

BB was an artist and naturalist as well as a writer, and he filled his books with glowing and accurate descriptions of the natural world so that you learned all about birds and blossom and sticklebacks as you were reading about the tiny, ancient beings and their quest to find their lost brother.

Re-reading it recently, I realised that there weren't many modern books for children that were as deeply rooted in the outdoors, so I decided to draw on the world BB had created but bring it right up to date in the hopes that it might prove a portal for modern children, just as BB's classic had been for me. 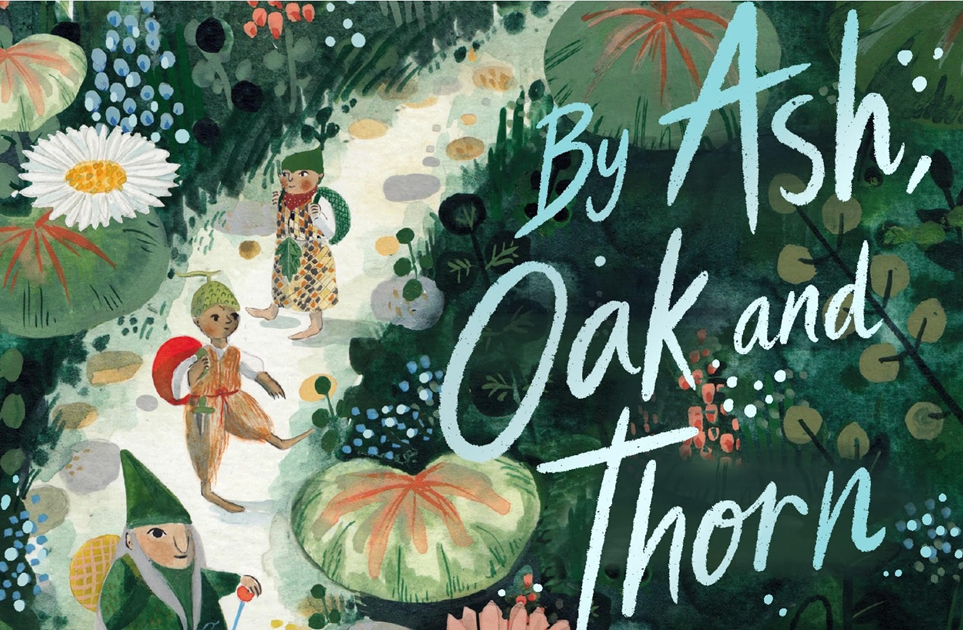 3. How have you drawn on BB's The Little Grey Men in your own plot? Did you also draw on the authorial 'voice' for your writing?

My books is full of nods to BB's classic, and the rough journey or quest shape is one of them - but the actual plot, the landscape and the cosmology are my own.

At first the 'voice' of By Ash, Oak and Thorn was much closer to BB's. Both my agent and my editor encouraged me to move away from it, and they were right: although my book was inspired by The Little Grey Men it needed to stand firmly on its own two feet, and for those feet to be planted in the modern world.

4. Did reading The Little Grey Men as a child help inspire your own passion for nature as an adult?

My mum read me The Little Grey Men along with many other classics of the English countryside, such as Tarka the Otter, A Black Fox Running, Watership Down, The Wind in the Willows, the Pooh Bear stories and memoirs like Cider with Rosie and Alison Uttley's A Country Child, all suffused with a love of woods and fields and hedgerows.

Growing up in the 1970s and 80s I was lucky enough to be able to play outside unsupervised, too, climbing trees, damming streams and coming home covered in cuts and scrapes. The outdoors wasn't somewhere I went, it was somewhere I lived, and it was where all the most interesting things happened - often out of sight, unless you could find the secret clues like footprints, droppings and burrows. It was a luminous world - it still is, to me! - and books were a big part of that.

5. Why do you feel it's important that children hear more about the natural world around them? What will children learn about nature when they read By Oak, Ash and Thorn?

It's vital that children develop a relationship with the natural world that's rooted in love and delight, rather than fear, guilt or anxiety - and stories are one way to inspire that sense of connection. We fight to protect the things we love, and never has that been more necessary than now.

I've packed the book full of all sorts of interesting facts and observations about nature for children to discover as they go along. But there are two overarching aspects to what I'm trying to do, I suppose. One is to create a sense of seasonality: of which things happen in which season, and why. The sense of the outdoors changing as the months pass is so important, and something I think we're in danger of losing touch with.

The second aspect I've emphasised is that there are no 'goodies' and 'baddies' in nature, just creature doing their best to get by - which sometimes means eating each other, and sometimes means living quite close to humans. It's important to respect animals for what they are - ie. just as important as we are, and with just as much right to their lives on earth - rather than reducing them to categories such as 'pest', which are usually a precursor to violence.

6.   Why did you choose these three trees in the title?

Oak, ash and hawthorn are all native British trees which have lived here so long that lots of creatures have evolved to make use of them for food or homes. It's also a reference - slightly altered! - to 'A Tree Song' by Rudyard Kipling, which appeared in his famous book Puck of Pook's Hill.

Puck is a very ancient being, and at one point he tells the children in the book: "The People of the Hills have all left. I saw them come into Old England and I saw them go. Giants, trolls, kelpies, brownies, goblins, imps; wood, tree, mound, and water spirits; heath-people, hill-watchers, treasure-guards, good people, little people, pishogues, leprechauns, night-riders, pixies, nixies, gnomes, and the rest - gone, all gone! I came into England with Oak, Ash and Thorn, and when Oak, Ash and Thorn are gone, I shall go too."

7. How did your three main characters develop and can you tell us a little about them and their world?

In The Little Grey Men the main characters were named after plants: Dodder, Sneezewort, Baldmoney and Cloudberry. I wanted to retain that naming tradition and also to ensure that none of the names felt too gender-specific, as some flower names might have.

My main characters are Moss, Burnet and Cumulus, the oldest; later, they meet Sorrel, an inventor. All four are Hidden Folk, and they were once guardians of the Wild World: each took care of a special place like a tree, a stream or a hill. But when Mortals (humankind) began to proliferate, they changed or took away many of the special places, and care of the world passed into their hands.

The problem is that we humans haven't realised it yet! So with their powers to protect having declined, the Hidden Folk need to decide whether to accept their fate and just live simply, as the animals do, or try to find a new role for themselves in the Wild World.

8. Is there a moment in the novel that stood out for you when you were writing it?

I loved writing about the Hidden Folk's magical journey with the deer, though if I'm honest, when I was describing a shoal of little brown trout who are so similar they're all known as 'Dave' I really made myself laugh!

9. Through the Hidden Folk's adventures, you also explore how we need to express our true feelings. Do you feel this is also an important message for children?

It's not just about expressing our true feelings but learning to be aware of them in the first place. Often, a feeling like jealousy gets covered up by another feeling, like anger - or anger by sadness, or fear by anger - because we don't think we're 'allowed' to have the original feeling - and if we don't experience and express a feeling properly, it trips us up later and makes us behave badly. Being able to notice and name a feeling - and help our friends to do that, without judgement! - is a really important life skill.

10. How hopeful are you about the future of our natural world, and our part as guardians of it?

We have enormous potential to do good, we have all the skills to do it, and the coronavirus has proved that we can make big changes when we want to. There is everything to play for, and we can each be a part of what happens next.

11. What are your favourite natural environments to explore?

I grew up loving upland landscapes like Dartmoor and Cumbria: rocky, treeless places with heather and gorse and moorland streams. Nowadays I live quite near the sea, but I'm most drawn to Suffolk's agricultural land. I love old farms with their jumbled outbuildings, and I love a nice, thick hedge. Places buzzing with life, and where I can touch the past.

12. Where are you most likely to be found when you're not working?

Even when I'm not sitting at my desk, I'm working - thinking, feeling, imagining, remembering! So there isn't any 'not working', really. I still love to spend time in London, though, where I lived for over 20 years. The anonymity, the crowds, the pace of it - sometimes I miss the city like a starling misses the flock.

13. What's next for Moss, Burnet and Cumulus as their quest continues?

The sequel to By Ash, Oak and Thorn is called By Rowan and Yew, and it's coming out in October. In it, the Hidden Folk leave the Hive and travel back to their suburban garden, encountering all sorts of perils and meeting new friends as they try to find a way to work that most dangerous of creatures, Mortalkind…!