Nicola Skinner worked as a copywriter and journalist for the likes of the Guardian and the Pool before being inspired to write Bloom, her first book for children, followed by Storm and Starboard (HarperCollins Children's Books). She lives in Bristol with her family.

1.  Can you tell us what Starboard is about, and how long it took you to write the book?

Starboard is the story of an old ship with a big secret. The ship comes alive and sets off for the high seas on one last adventure, with a reluctant schoolgirl, Kirsten, onboard as her next captain. Kirsten has several truths to uncover, and some unfinished business to sort out, if she has any hope of getting home.

I started thinking about the book in 2018 - so three years before it was published. I spent months on research. The first draft took about eight months, the second around four. Far too long is I believe the right answer.

2.  What drew you to writing about this particular ship, the SS Great Britain?

She has presence. I felt it the first time I saw her - something so powerful you can practically touch it. That's what compelled me to discover more about her story.

Also, there's a museum you walk through, before you board the ship, put together by the SS Great Britain Trust. It's got very evocative photos and artefacts inside - which worked on my imagination.

3.  Did writing about something real and with a history make it easier or harder to write the novel?

It made it much harder in that I put a lot of pressure on myself. I wanted to do her justice and I didn't want to get anything wrong! She's such a significant ship - I wanted to give her a plot that felt equal to that, which was challenging. My editor had to read several streams of consciousness until I understood what the story might be; luckily he has forgiven me. 4.  Where did you go to research the SS Great Britain? What was so innovative about it?

I live in Bristol so was lucky to be able to visit her repeatedly in 2019, before lockdown. I also spent time in the Brunel institute and looked at Isambard Brunel's diaries and drawings (with proper white gloves to turn the pages - exciting!) The rest of the time I was at home, reading books about her. I never thought I'd find books about ships so interesting.

What made her so innovative is that she was the world's first transatlantic iron ship with a screw propeller. But those words written down don't do justice to what that meant at the time. After an innovation is achieved, it's so easy to take for granted. The combination of all those factors were only made possible because of fierce daring, questioning, and danger; the efforts of people striving to invent something completely new - to break through the barriers of what was thought possible at the time.

I heard someone describe Brunel as being not at the leading edge of technology but the bleeding edge - he was so ahead of his time it was dangerous. People like him literally risked their lives to change the world: and yes, they were doing it because they were ambitious, but they were also doing it to advance humanity. That's real innovation. Blimey this answer is long. Sorry.

5.  What stood out for you about the ship's sailing career?

Just that it was never - ironically - plain sailing. From the moment she was launched, trouble and drama seemed to beset her; her launch was problematic, the first champagne bottle didn't smash, she got stuck, beached. People were very dubious about her and for her first few journeys she was quite empty, and the cost of her bankrupted a lot of people.

I also think it's fascinating how she changed over her lifespan - from a glamorous, cutting-edge ship to a shabby cargo ship - yet she just kept going. She never sunk. Finally, the eighty years she spent falling to pieces out at the Falklands before she was rescued. The photos of her as a wreck there, and coming back to Bristol, never fail to move me. She's so much like a person, in that respect - she's lived through several dramas. That's several answers in one; I really need to work on brevity.

6.  Why did you decide to connect the ship's final journey with a child reality TV star, Kirsten Bramble?

I just knew I wanted a child who was somehow … a bit broken? I wanted the child and the ship to heal each other, in some way. And I guess there was a parallel between the two; that the girl would know what it was like to be a celebrity, and the fickleness of that. They both have that in common.

7.  Kirsten can 'see' the ship's dreams. If you could enter a part of the ship's history, which era would you want to go to?

I'd like to go right back to the very first moment when Isambard Brunel first put pen to paper and began to sketch her out. Then I'd like to be around for her first ten years - I'd like to be there, right at the start. Watch sunrises from her deck. Be there as the passengers wake up. Amazing. 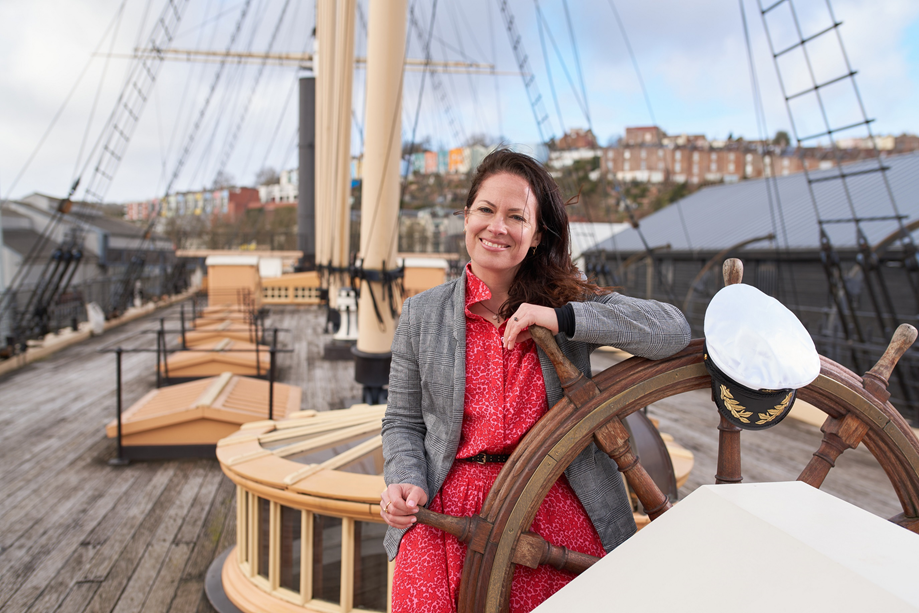 8.  There's a wonderful talking map in the story - how did that come about? Whereabouts do you think the map would send you - post lockdown!?

The map just came to me one day - very easily. (Perhaps because it knew the rest of the book was such hard work.) The map sends people to places that are difficult for them, so they can confront things. I couldn't possibly comment on where that might be, for me.

9.  You also bring some mannequins into the story - were these inspired by those you saw on the ship?

Absolutely - gotta love a mannequin. The ones in the SS Great Britain sometimes make kids cry because they're a bit - creepy. Kirsten feels the same about the ones on the ship, too, for a time.

10.  What other details from the ship stood out for you during your visits and made it into the final story?

Basically, the ship's interior is filled with magic. It has all these different natural lights, and they seem to move around like people. And the rooms themselves seem to be on the brink of moving around too. That feeling of being inside a playful interior that doesn't obey physics and is capable of mischief makes it into the book. And the absolute power of the ship's engine room - it's overwhelming. That's in the book too.

11.  What are you working on currently? When and where do you prefer to write?

I've got a fourth book for children to turn into some kind of cohesive shape which I'm excited about.

As for the when and the where? I'll honestly take whatever I can get; but generally, I prefer to write first thing in the morning, from around 9, somewhere quiet. I don't care if there's mess around me, that all disappears anyway. I love it when it's raining - I find writing on a sunny day so hard.

12.  What are you most likely to be doing when you're not writing?