The winners of the Yoto Carnegie and Kate Greenaway Medals 2022 have been announced. The awards celebrate outstanding achievement in children's writing and illustration respectively and are judged by children's and youth librarians, with the Shadowers' Choice Award voted for by children and young people.

The Carnegie Medal is awarded to Katya Balen for her second novel October, October (Bloomsbury), illustrated by Angela Harding. Her debut novel, The Space We're In was longlisted in 2019. October, October is a "beautiful" and "captivating" story of a girl, October, who must learn to spread her wings after a childhood spent living wild in the woods changes dramatically the year she turns 11. The story was inspired by Balen's father-in-law who lives off-grid, and her own love of mudlarking and the outdoors.

The Kate Greenaway Medal is awarded to Danica Novgorodoff's illustrated edition of Jason Reynold's Long Way Down (Faber), which was shortlisted for the Carnegie Medal in 2019. It is the first graphic novel to win since Raymond Briggs' Father Christmas in 1973. This is Danica's debut children's book published in the UK and is an "innovative" adaptation of the original verse novel of gun violence and grief written by Jason Reynolds, featuring hundreds of "stunning" watercolours depicting the decision that 15-year-old Will must make when his brother is shot. Author Jason Reynolds won the Carnegie Medal in 2021 for his novel, Look Both Ways.

October, October and Long Way Down "place readers directly into the main characters' shoes as they face challenges that upend their lives", say the judges. Through Balen's poetic prose and Novgorodoff's breath-taking illustrations, October and Will's emotions are brought to life on the page.

Both winners gave powerful speeches at the ceremony, sharing their passion about the freedom and connection that stories in all forms can provide young readers, and the paramount importance of children being allowed and encouraged to read whatever they choose.

Balen's October, October has also won this year's Shadowers' Choice Award for the Carnegie Medal, after tens of thousands of young people across the UK and internationally read and debated the shortlisted books before voting for their favourites. The winner of the Shadowers' Choice Award for the Kate Greenaway Medal is The Midnight Fair (Walker Books), illustrated by Mariachiara Di Giorgio ­- an illustrator, storyboard artist and concept designer from Rome, Italy - and written by Gideon Sterer. It is a heart-warming, immersive wordless picture book that uncovers the secret life of animals who prowl a fairground at night, featuring sumptuous use of colour and contrast, which invoke all the senses.

The winners were revealed in a lunchtime ceremony held in person at The British Library for the first time since 2019. It was hosted by award-winning poet and novelist Dean Atta and featured Chair of Judges, librarian Jennifer Horan, alongside a selection of the young people who officially shadowed the 2022 awards.

The ceremony was streamed live and can be watched back here.

The two medal winners were chosen from a shortlist of 16 - eight for each medal - by an expert team of volunteer judges, featuring 14 librarians from CILIP's Youth Libraries Group based across the UK. 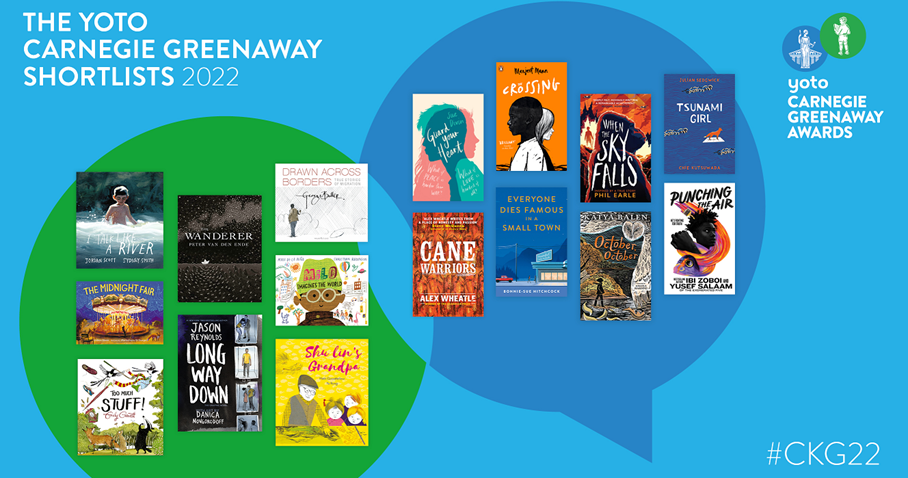 Jennifer Horan, Chair of Judges for the Yoto Carnegie Greenaway Awards 2022, said, "October, October by Katya Balen is a captivating story featuring exquisite descriptions of the natural world and relationships that develop and heal. It is an expertly written, beautiful and lyrical novel alive with wonder and curiosity.

"Long Way Down, illustrated by Danica Novgorodoff, is a brilliant, innovative adaptation of the novel by Jason Reynolds. It uses stunning watercolour to powerfully portray the tragedy of gun violence and the emotional impact it has on young people's lives."

South London-based author Katya Balen, who has spent her career working in SEND schools and is the co-director of Mainspring Arts, an organisation which runs creative workshops for neurodivergent people, said, "I am so thrilled to have won the Yoto Carnegie Medal, not only because it's the award every children's writer dreams about, but because it is so committed to promoting reading and sharing stories. Sharing stories is something I believe to be one of the most important parts of our lives, simply because stories are our lives. They are threads that connect us all. They make us understand, they give us a shared experience, and they give us something special and private too. They give us wild freedom and they give us safety and comfort."

"In my book, October is saved by stories. She is isolated, unusual, angry, friendless, lost, displaced, wild. But through stories she is able to connect to the world around her, and to the people around her. Stories make her who she is, but they also help her to see who other people are too. Stories make her a part of a new world, and keep her old life alive. They connect everything and everyone, and that's what is so magical about stories. They build us, they anchor us, they let us be wild. They are everything."

Writer, graphic designer and horse wrangler Danica Novgorodoff, from Louisville, Kentucky, has created a number of graphic novels, but Long Way Down is her first children's book published in the UK. The judges were "blown away" by her "powerful and immersive illustrations" and said that the "union of brutal reality with the delicacy of watercolours as an artistic device is surprising and breath-taking in its execution". They thought it was "an incredible book that will stay with the reader long after the final page."

Danica Novgorodoff said, "I am honoured and humbled to receive the Yoto Kate Greenaway Medal. Working on Long Way Down, interpreting Jason Reynolds' beautiful text into images, was a dream project for me and its own reward, but I am thrilled to find that the graphic novel has resonated with readers as well.

"Long Way Down is a book that asks us to empathise with a character who is planning to harm another person, and endanger his own life, out of grief and revenge. He's in a complicated, difficult situation, and he needs to make a very hard decision. Through the illustrations, I wanted to show this emotional torment, to make his internal feelings come alive on the page. The book doesn't preach, but it asks readers, what do you feel, and what would you do?

"I believe that kids are empowered when they have access to all kinds of books, and can choose for themselves what they want to read. Graphic novels can be an especially engaging form of reading, and a gateway to all types of literature. But graphic novels are also an extraordinary, complex, versatile medium in themselves, not dumbed down versions of "real" books. You wouldn't discourage a kid from going to a museum to look at paintings or sculptures or photography, so why would you tell them not to look at artwork in a book? Images are visceral in a different way than text, and when an artwork moves you, it's speaking to you in a different language than words. There is no single way to tell a story, and graphic novels are one fascinating way to express emotions and ideas that can't be put into words alone."

The winners each receive £500 worth of books to donate to their local library of their choice, a specially commissioned golden medal and a £5,000 Colin Mears Award cash prize.

Novgorodoff has chosen to donate her books to the Western Branch of the Louisville Free Public Library for the £500 prize, which opened in 1905 and was the first library in the nation to serve and be fully operated by African Americans. Katya Balen is making her donation to London's South Norwood Library, which was recently threatened with closure.