Ella Risbridger is a journalist, anthologist and cookery writer. In a former life she was a beauty columnist for the i, a cancer columnist for the Pool, a sometime journalist for lots of places (Guardian, Observer, Prospect, Grazia, Stylist), a poet and a carer.

She now lives and works in south-east London, where she has too many books and a cat.  You can find her on Instagram @ellarisbridger.

And Everything Will Be Glad to See You: Poems by Women and Girls  (Nosy Crow Books)

This sumptuous collection of poetry, focused on poems by women, girls and non-binary people, is a response to the lack of representation in current collections, says its editor Ella Risbridger.  She hopes the collection, And Everything Will Be Glad to See You, will help inspire children and young people to start creating their own poetry collections. In this Q&A, she tells us why she wanted to create a collection of poems by women and girls, and how she hopes readers will be introduced to the poems it contains.

1.   Can you tell us a little about what poetry means to you, and why you wanted to create a poetry anthology for Nosy Crow?

I have loved poetry all my life. I thought I'd grow up to be a poet, but making a living from poetry is so hard...and I like chatting too much to keep to the word counts. I write poetry, but just for myself, to make sense of the world. Sometimes lines from my poems end up in my prose, which I like. It keeps the prose bouncy, if you see what I mean. I'm a real believer in mixing them up: in using the rules of poetry to make your everyday writing better. That's why I think reading poetry makes you a better writer, even if you're only going to write postcards or tweets or texts. Alliteration, assonance, repetition: it's all good stuff. It sounds good when you hear it. It feels good to say!

2.   What were your aims with this collection, and why did you want to focus on poems by girls, women and non-binary people?

Basically, because when you open most anthologies, you're almost certain to land on a poem by a man. Very boring, very unfair. This happens for money reasons: you have to pay for every poem you put in that's in copyright. To make the financials of an anthology work, you need a mix of copyright and out of copyright poems...and most of the out of copyright poems are by dead white men. Which is fine! There are some lovely poems by dead white men! Some of my best friends are dead white men! And yet...it makes the anthology feel stale, and old, and unrelatable. Also boring. So we did this, instead, to make the change that had to happen.

3.   How did you find poems for the collection, and how have you organised the anthology?

I knew there were some I really, really wanted, and some I found by going through basically every single poetry collection in London's Poetry Library with a stack of post-its. I sat there for hours every day, photographing poems and transcribing copyright pages, and hoping that my publishers liked them as much as I did. I think they did, and I hope you do too.

The anthology is organised by - well, I suppose you could call it a whim. What I love, with an anthology, is when each page feels like it naturally flows on from the page before - so you can open it and read one poem, or ten, or the whole book, and never feel short-changed. I put all the poems on a big table, and move them around until the images sort of seem to flow from one to the next. And then my editor, Lou, looks at them - and she talks to the illustrator Anna - and together we decide what shape the book should have, and how the pictures should also help capture that mood.

4.   Do any of the poems in this collection stand out for you for particular reasons?

All of them, for all different reasons! Each one has something special. I love the Joy Harjo poem, for example, because I found it in a book of poems originally written in languages that are going extinct, and translated into English. That felt really special to include. And there is a Carol Ann Duffy poem about brilliant grandmothers - "she had a ball and was belle of it / just for the hell of it / she was so cool she was cold / she shook, she rattled, she rolled"- which my great grandmother gave to me when I was little. She gave it to me, and whispered - "This is about your Granny Beth!"- her daughter in law. Which is a really precious memory to me. 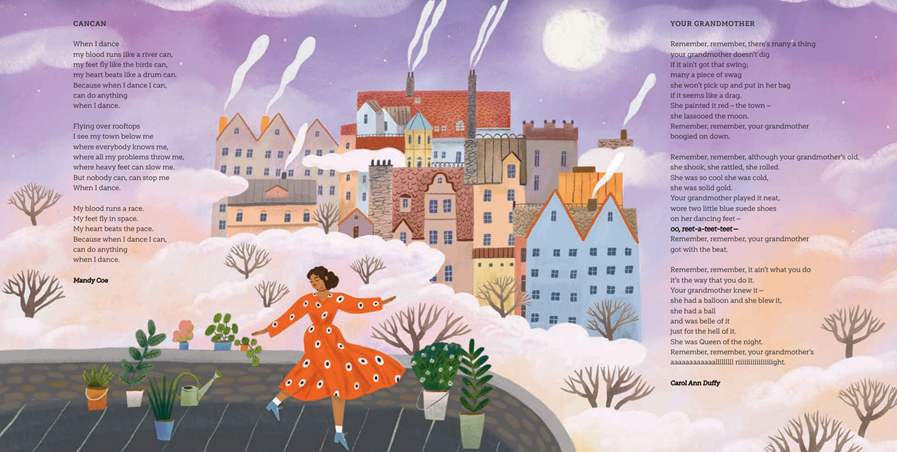 5.   The poets are of all ages, but who is the youngest poet in the book, and how did you come across their poem?

I think it's actually Marjorie Fleming! She was born in 1803, and she was six when she wrote the poem in this book - In Isa's Bed - about sharing a bed with your big sister even when you are "continually fijiting and kiking". She died in 1811, aged nearly nine- which is absolutely devastating. But to get to include her work, so many years after her death, is really moving. She's so funny and sharp and silly- "oft I embrace her feet of lillies / she has gotton all the pillies" - that she feels like every other girl. In a way, it felt like we got to give her a chance to live again in the company of real writers, as she knew herself to be, and other little girls - the readers, and the other writers.

6.   Which poems would you particularly like to hear aloud?

The Orange, by Wendy Cope. Just read it! Read it now! It's so fun and joyful. And my dad used to read us Goblin Market, which is also magnificent to hear aloud.

7.   How would you like children to be introduced to this anthology?

Ideally, I would like kids not to read the introduction or the afterword until they really feel like it. My dream is that someone gets this book as, say, a christening present; then they look at the pictures for a few years; eventually read the poem attached to the beautiful mermaid picture or the spooky old-fashioned times lady walking on a misty beach, and understand about a third of it. But something of what they understand - and something of what they don't understand - sticks, and they find themselves thinking about it sometimes. And then, a bit later, when that person is eight or ten or twelve, they read a bit more, and understand a bit more, and remember a bit more.

I'd like to make children feel at first magical about this book, and then completely ordinary and everyday: I'd like this anthology, because it's so beautiful, to draw them into something new, and then for those words to live off the page as well. I'd like the words of at least one of these poems to lodge somewhere in their minds, and stay there. That's always the hope with poetry, isn't it?

8.   Why do you suggest that readers start building their own collections of poems?

Partly because it's extremely fun, to make a thing, and I always think books are better when they leave you with something that you, yourself, can do. [Can you tell I write cookbooks?] But also, because I want readers to build their own relationship to poems, and poetry. I want readers to think about what they like, or what scares them, or the images they can't put down.

9.   What do you think of the final anthology with the illustrations by Anna Shepeta - what do they bring to the collection? Do you have any favourite spreads?

I simply think it is the most beautiful book I have ever seen. I love it. I love it so much. I have two favourite spreads: the two girls in the bathtub, with the poem Granny Granny Please Comb My Hair, because I have very thick hair and spent much of my childhood between someone's knees, having it detangled and combed and plaited, and when I read this poem aged about six I understood absolutely it was for me. Which is such an important moment to have with any art. Also, it's my god-daughter's favourite page. She's a very cool almost-teen now, so I take her word very seriously. The picture has everything I could have dreamed of.

My other favourite spread is the one with Grace Nichols, Edna St Vincent Millay, and Rachel Plummer. I love this spread because it is exactly the "mix" I hoped to achieve with this book. It feels really representative of what I most hoped the book could be: a place for different poets to speak to each other across time and space, and to speak to the reader together.

Sea Timeless Song I think I first came across at school, and loved it. It feels like the sea to me, despite being about a tropical sea very far from the one I grew up with. The Edna St Vincent Millay, about wet rocks and slime, is much more the sea I remember! And I came across Rachel Plummer a few years ago, when a friend came out as queer, and I sent her Plummer's book Wain, which is an LGBT+ take on traditional Scottish folklore. I loved it immediately: the line "swaggers like a mermaid" swam into my head, and stuck there. I loved the idea of these three poems, very different in tone and style and story, could come together to say something about what the sea is; and what the sea does for us. And Anna captured all of that so beautifully in her paintings. The yellow wellies! 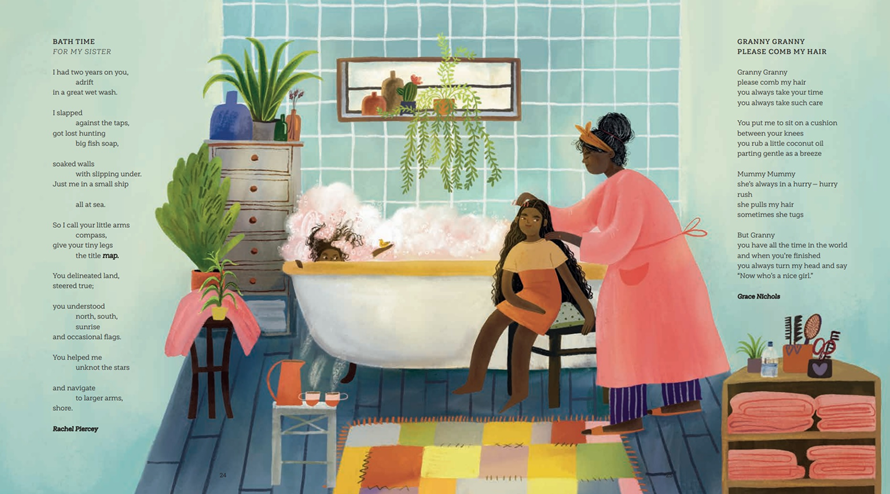 10. Are you planning any more anthologies or activities with poetry?

I would love to do more anthologies! Right now, I'm focussing on this one - each one takes so long to do - and developing a series of workshops for poetry creation. I love the idea that you can find poetry anywhere, and you can make it out of anything- so we'll start there, and see how we go...

And Everything Will Be Glad to See You: Poems by Women and Girls (Nosy Crow Books) is now available from all good bookshops (£20.00)