Robert was inspired to create his bestselling CHERUB series by his nephews' complaints about the lack of anything for them to read! CHERUB: The Recruit was Robert's first book and the series went on to become a multinational success for Muchamore.

Muchamore went on to write the four-book ROCK WAR series in which a group of teenagers seek fame and fortune when they enter the Rock War challenge.

He is now re-writing Robin Hood for the 21st century. The latest book, Robin Hood:  Piracy, Paintballs & Zebras, has just been published.

In this swashbuckling adventure series from CHERUB author Robert Muchamore, Robin Hood is reinvented for the 21st century!

The books follow a young Robin Hood, forced to flee corrupt officials into Sherwood Forest where he joins the 'Forest People' and begins a very personal battle for justice.  Watch Robert Muchamore introduce Robin Hood in this video: 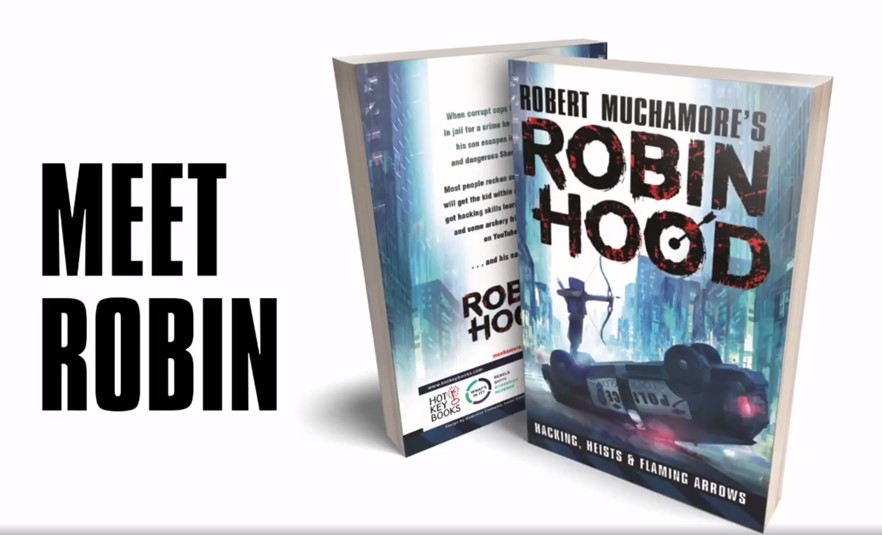 1. Can you tell us about your Robin Hood series (Hot Key Books)?

The first book in the Robin Hood series - Hacking, Heists & Flaming Arrows - ends with a citywide riot and Robin firmly established as a figurehead for a group of modern-day rebels living in Sherwood Forest.

In book two, Piracy, Paintballs & Zebras, Robin gets involved with an animal rights group with a plan to sabotage a trophy hunt held in the grounds of Sherwood Castle.

2. What inspired you to draw on the legendary Robin Hood for a series set in today's world?

I like to say Robin Hood is a kind of trashy Shakespeare. People have been reinventing the legend for centuries and in the current social climate, a hero who takes from the rich and gives to the poor seemed to have more resonance than ever.

3. Other than knowing the story, did you need to do any research before you started writing?

The interesting thing about Robin Hood is that there isn't a single knowable story. I did lots of research into Robin Hood from the oldest known ballads, which date from around 1500, up to the most recent movies.

Lots of the characteristics we associate with Robin are relatively recent, coming from early Hollywood films and the moral perspective from children's novels written in the Victorian Era. It was also fascinating to look globally and see Robin depicted in Bollywood movies, Japanese manga and even a smash hit TV show in the Philippines.

4. What was it like creating your own 'Robin Hood'? What were the challenges in having a young and modern Robin?

The hardest part was creating a setting that merged the traditional rural setting of a Robin Hood story into a believable version of the modern world.

I read 100 Years of Solitude just before I wrote my first draft and things got a bit weird and magic realist! Then I started watching the Donald Glover sitcom Atlanta and it all went urban and street.

I think I ended up about halfway between the two...

5. You gave your Robin Hood a bow and arrow - why did you decide to keep to that weapon? Did you try out your own archery skills for research?

I have a weird personal reason for this. As a little kid, The Dukes of Hazzard was my favorite TV show and they used to run around shooting and blowing things up with bows and arrows.

The back story was that the Duke boys were on probation so they couldn't carry guns. But they were always pulling off amazing stunts with their bows and arrows, which got re-enacted by me and my pals in the primary school playground.

I planned to do a beginner's archery course. But writing the first Robin Hood took place while both of my parents needed end of life care. Sadly, the archery was one of many things that got cancelled during that period.

6. Which other Robin Hood characters were you most keen to bring into your contemporary world - and which are you most pleased with?

The disappointing aspect of most Robin Hood stories is that the two main villains, The Sheriff of Nottingham and Guy Gisborne, get portrayed as cardboard cut-out baddies with the evil laughs and black clothes.

I think stories are more interesting if the baddies have depth and I'm pleased with my version of the sheriff.

At first glance, Sheriff Marjorie is a shameless Trump-style populist, who hates immigrants and forest people. But as the series progresses, we'll start to see something more subtle and emotionally complex.

7. Is your setting, Locksley, based on somewhere real?

Locksley is a run-down city that was devastated by the collapse of its auto industry. The obvious parallel is Detroit, but I wanted to reflect the global nature of the Robin Hood legend by adding much broader cultural influences.

Locksley has Canadian style donut shops, giant American freeways, a big Polynesian community, but people pay for things in pounds and the local river is called the Macondo, which is the name of the town in 100 Years of Solitude!

8. Robin and the thousands of other 'Forest People' living in Sherwood Forest are described as criminals and bandits by the local media. Are you reflecting on how outsiders are seen in today's world?

I wanted young readers to think about how people with differing opinions can portray the same event in different ways.

There are several points in the books where Robin does something heroic, but then we see a media report where the authorities stage a cover up, or Sheriff Marjorie spins the truth and in a way that makes herself look good.

9. The latest novel, Piracy, Paintballs and Zebras, does actually include zebras - why did you want to bring a zoo to Sherwood Castle?

Ironically, book one has Flaming Arrows in the title, but they were in a flashback scene that got cut out during the edit!

The zebras that escape at the start of book two are going to crop up again at key moments over the rest of the series.

All will be revealed, as they say!

10. How would you cope if you found yourself joining Robin in Sherwood Forest? Do you have any special talents you could contribute to the community?

I'd be useless! It's ironic that I write spy and adventure stories, but I'm the kind of person who can't change a car tire and moans when it's muddy on Hampstead Heath.

11. How many Robin Hood books do you plan to write?

I signed a contract for four books. Hopefully, enough people will buy those for my publisher to want more, because I've planned an epic twelve book storyline and I'm keen to write all of it.

12. Where do most of your books get written and what are you writing at the moment?

I'm boring! I only write at my desk in my office at home. Though I've been known to move to a laptop on my bed when I put my back out.
The third Robin Hood book is in the bag and I've just started work on number four.

13. What has kept you sane during lockdown?

I'm not entirely sure I have stayed sane in lockdown! Though since I live on my own and work as a writer, the changes to my everyday routine have been less dramatic than most.