The Klaus Flugge Prize for the most exciting newcomer to children's picture book illustration is awarded to Flavia Z. Drago for Gustavo the Shy Ghost.  Mexican Day of the Dead festival, old horror films and The Smiths all provided inspiration for the book.

Flavia Z. Drago's book, Gustavo the Shy Ghost (Walker Books), is about a little ghost who despite being so shy he is invisible to the other monsters eventually finds a way to make friends.

Watch Mat Tobin of Oxford Brookes University - one of the judges - share the shortlisted picture books.

Flavia was born and raised in Mexico City and her book takes inspiration from her favourite Mexican tradition, The Day of the Dead celebrations, particularly in its bright pink and orange palette. Sharp-eyed readers will spot references to other influences on Flavia, including horror films and books, and The Smiths: a shy child herself, their song Ask has always been a favourite and a cassette of it is visible on Gustavo's writing desk. 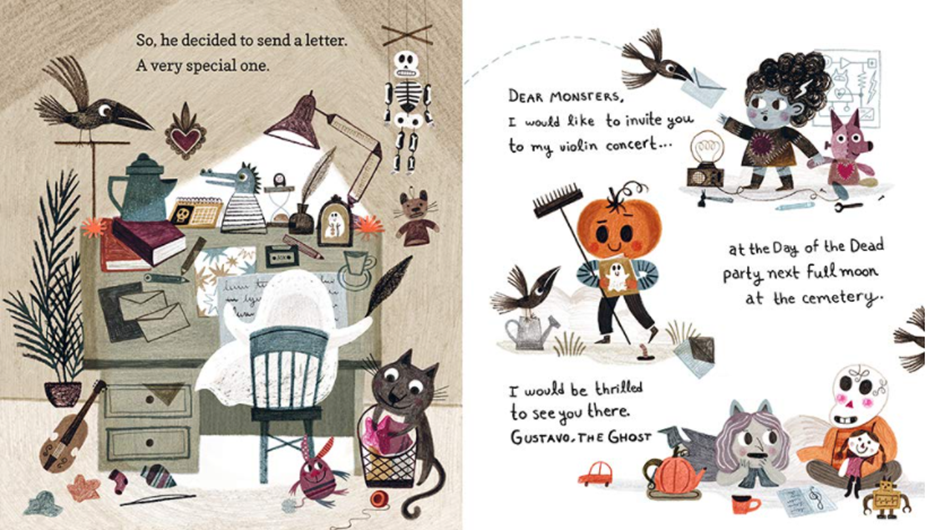 Flavia says that sees herself in little Gustavo, "When I started work on the book, I didn't notice how much I had in common with Gustavo, but as I got to understand him, I realised that telling this story was important for me because I wanted to show that being shy doesn't mean that you don't enjoy the company of people - or in this case, monsters! - it just means that you find it difficult to connect with others.

"Some of the things that happen to Gustavo are based on my own experiences. When I was in kindergarten - just like Gustavo - I sat by myself during lunch breaks, watching children play while being amazed by the fact that they seemed to be completely happy to talk and play with each other.

"The main difference between Gustavo and me, is that, sadly I cannot do the ghostly things like walking through walls, making objects fly, glowing in the dark or playing the violin. However, drawing became a way in which I could connect with others. In a sense our love for art has been the thing helping us both to connect with others."

The Klaus Flugge Prize judges loved the balance of fun and fright in the book, and admired Flavia's superb control of pace and the composition of her illustrations.

Flavia Z. Drago said, "I feel incredibly happy and honoured to have won this year's Klaus Flugge Prize! Getting my first picture book published was a dream that started about ten years ago. The journey was filled with ups and downs, rejection, uncertainty, and constant learning. I am so grateful to my lovely team in Walker Books for giving me the opportunity to make a story about shyness and monsters, and for having allowed me to share a glimpse of Mexico and its most beautiful celebration (The Day of the Dead) with the rest of the world. Making picture books is a privilege and joy, and I hope that I will be able to keep doing this for many years to come."

Judge and winner of the 2020 Klaus Flugge Prize, Eva Eland added, "There is so much to admire and enjoy in Flavia's book. From the carefully selected colour palette of muted tones combined with bright orange and pink, to the myriad little details in the illustrations and her endearing and fun characters. Flavia has great control of many different facets of illustration and storytelling, including pacing, colour and a strong sense of design. She also has great drawing skills. She delivers a powerful and universal story, whilst maintaining a light-heartedness and a playful touch that will speak to many little children."

Established in 2016, the Klaus Flugge Prize was founded to honour publisher Klaus Flugge, an influential figure in picture books. Flugge set up Andersen Press in 1976 and has discovered and nurtured many of today's most distinguished illustrators including David McKee, Tony Ross, Satoshi Kitamura, Ruth Brown and Susan Varley.

Alongside Eva Eland and Posy Simmonds, the judges are Darryl Clifton, Illustration Programme Director at Camberwell College of Arts; Fleur Sinclair, owner of Sevenoaks Bookshop; and Mat Tobin of Oxford Brookes University. Julia Eccleshare, director of the Children's Programme at the Hay Festival, is Chair of the Judges.