Andy Shepherd is a bestselling author of middle-grade fiction, including The Boy Who Grew Dragons series, and picture books. She lives near Cambridge with her husband and two sons. She spends her spare time trying to figure out how to move this beautiful city closer to the sea.

Read a Chapter from The Ultimate Guide to Growing Dragons

We spoke to bestselling author Andy Shepherd to find out more about her series for younger readers, The Boy Who Grew Dragons, and what to expect in the final book in the series, The Ultimate Guide to Growing Dragons!

1.    Can you tell us how the first dragon story - The Boy Who Grew Dragons - came about?

I've always told my sons stories and one day I told them about this dragon that would fly down and lift our car out of a traffic jam - we really wanted to get to the beach! I loved the idea of a dragon and the magic it would bring being in our ordinary world, not somewhere fantastical.

Then my sons started asking questions, 'Why did the dragon live in our village?' 'Where had he come from?', 'Why did he disappear sometimes?' So I had to come up with some answers. And the story just grew and grew, and then I remembered there actually is a dragon-fruit tree - and rushed off to look it up on the computer - just like Tomas.

Straight away, I knew it deserved to be in a story, because it really is an amazing plant, with these wonderful spiky fruit and huge moon-white flowers that only bloom for one night.

2.    Why did you decide to create an 'Ultimate Guide' for The Boy Who Grew Dragons series?

Originally, I had the idea of writing a 'non-fiction' style guide to bring together everything Tomas had learned along the way. But I soon realised that I wasn't as motivated to write that. What I love writing is the relationships and the little heart moments between the characters. So I started thinking about a way I could combine a guide and a continuation of the adventure.

As soon as I started writing in Tomas' voice, he showed me how it might work. Having the superhero squad scattered around the world meant they could find out things wherever they were, but bring it all together to solve one final mystery. I was a bit worried about having the varying formats of guide vs story, which is why I've been so thrilled to get the feedback from teachers that they are finding it a really useful tool to show a variety of writing styles.

3.    Will this be the last book in the series, or are others planned?

I said the fifth book, The Boy Who Sang With Dragons, was the last one and look what happened - there was another dragon just waiting to swoop in! So I won't say never, but I don't currently have plans for more in this format. But who knows where else the dragons may fly!

Just this summer I had the opportunity to write the lyrics to some Dragon Songs for a project with the Britten Pears Foundation. There are twelve songs based on the books, with lyrics by me and music composed by the wonderful composer Joanna Lee. (You can find out more about the songs and access all the free resources to use them and sing them at Friday Afternoons Music.

4.    Can you tell us a little about The Ultimate Guide to Growing Dragons and what readers can expect?

In The Ultimate Guide To Growing Dragons, Tomas and the superhero squad are scattered around the world from Mexico to China to Spain. Messages ping back and forth as they share their adventures and continue to help each other. And it's just as well they do, with a fiery new visitor in the garden to deal with and a quest to find the remaining dragon-fruit tree in Mexico.

From finding out about water dragons in China, Quetzalcoatl in Mexico, Draco the star dragon and using what they learn about geoglyphs to discover a huge forest dragon cutting through the trees, there's certainly a lot to keep them on their toes! 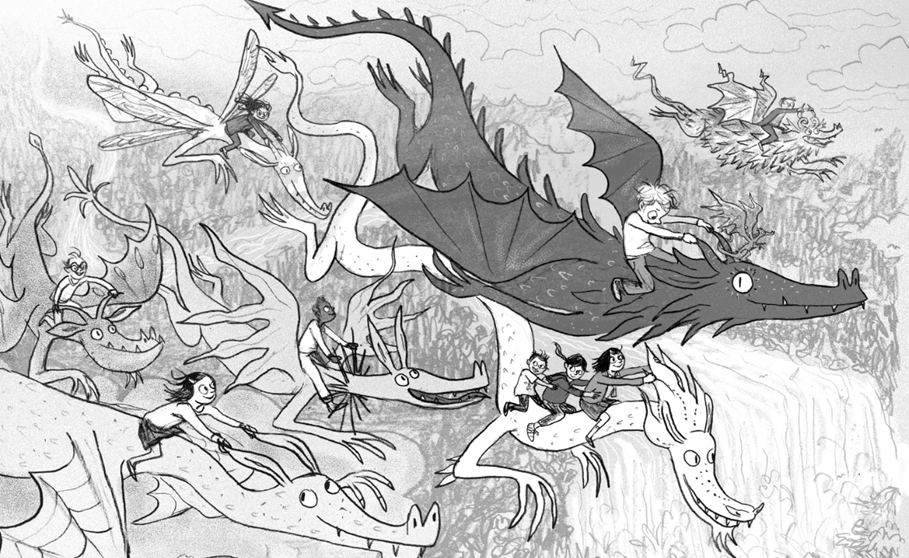 5.    Do you feel that, like Tomas, there are still things about dragons that you have to learn?

Absolutely! Every time Tomas grows a new dragon he has a new challenge and so do I, figuring out what they like and how to look after them. It was also amazing to find out about the star dragon! In previous books we learned that the dragons fly North following Polaris, the North Star, but what I didn't know until I started writing this book was that there really is a constellation called Draco near Polaris! It was one of those wonderful things you can find while writing - a real moment of serendipity.

6.    Why did you decide to look at other dragons from around the world in this story?

With Kat and Kai moving to China and Aura visiting Arturo in Mexico it seemed the perfect opportunity to explore how dragons differ around the world. I had so much fun learning about them alongside Tomas. But it's just whet my appetite, as like him, I found there was so much more to discover.

7.   What is your favourite part of writing these books? What keeps bringing you back to Tomas's adventures with dragons?

For me it's the relationships that draw me back to the story. I love writing those moments between Tomas and Grandad and Tomas and Lolli. It's always lovely to hear Grandad's quiet wisdom and see how he really takes the time to listen to Tomas. And how Tomas does that too with Lolli.

I have loved developing the characters over the six books and taking my time to let them grow. When I wrote the ending of this book I did get a bit emotional, because I feel like I've been there with Tomas holding his hand and now it really is time for him to explore a little more on his own. I think as writers we often draw on our own experiences and I've definitely brought things that have been relevant in my own life at the time of writing into these stories. As a result, I often have to remember to listen to Grandad's advice myself! 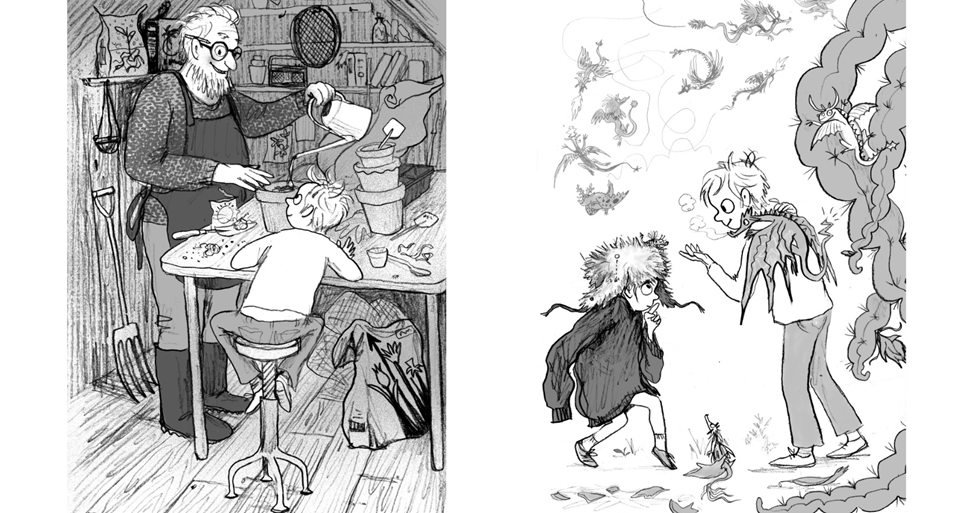 8.   The stories have a real emotional heart - how do you develop that in these adventures?

I'm so glad you think so - it's definitely something I work hard to bring out. I think for me the key is looking out for times in the story where I can slow the pace a little and really let the characters share how they are feeling. It's also about letting them learn at their own pace, even if that leaves them feeling a bit uncomfortable for a while - then the pay off and the shared moment can be all the sweeter.

9.   Tomas has had two dragons to look after - do you have a favourite?

I find favourites very hard! But I guess Flicker was the first dragon Tomas and I ever grew so he has to have a special place in my heart. (My inability to choose favourites might also be why he flickers all the colours so I didn't have to pick just one!)

10.  Have you created any dragons in the books inspired by ideas from your readers?

Not as yet, but I absolutely love hearing about the kinds of dragons readers would grow themselves and I'm always amazed by the ingenious ideas they come up with.

I think dragons are endlessly appealing, but then the idea that you could grow one yourself, brings all that possibility of magic right onto your doorstep. I think it's really exciting, because anybody could find one of these trees.

11.   You invite children to create their own dragons and dragon guide in this book - why did you want to include that?

Tomas and his friends call themselves 'the superhero squad' and as the stories have grown, so has the squad. They decided to start sharing the magic with their families as it became increasingly clear they'd need all the help they could get.

In this book it grows even bigger as they find the dragon-fruit tree in China and meet new friends Meilin, Luan and Liang. I liked the idea of inviting the reader to join them in looking after the dragons and the tree and sharing what they find out about them, because as Tomas realises, there is a lot left to learn and when we work together magic can happen. 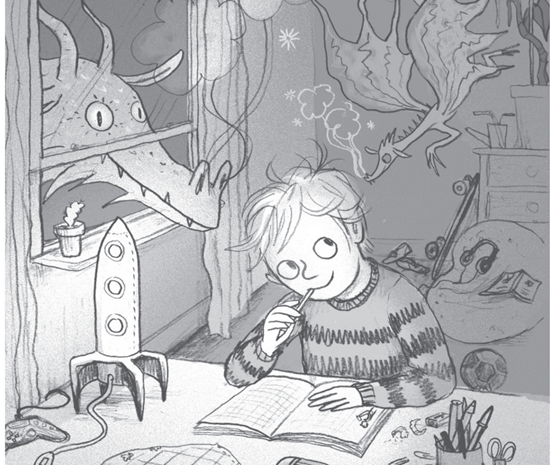 12.   What about Sara Ogilvie's drawings of your dragons - do any stand out for you?

I love ALL of Sara's artwork, it's impossible to choose favourites. She always includes so many lovely little details and I particularly love the use of light in her illustrations. There's a genuine feeling of warmth when you see her characters and I couldn't be more thrilled that she has illustrated all the covers and insides.

13. Where and when do you prefer to write? What are you writing currently?

Since we moved house I do now have an office, though it is also the spare room, which can be quite handy as there is a bed to lie on if I need some 'dreaming time'. I spend a lot of time staring out of the window and luckily have a nice view and can watch people walking their dogs. It's a standing joke that I spend most of the day brewing and thinking and procrastinating and then start writing just as the boys get home from school.

I'm currently editing a whole new story, I can't say anything about it yet but it is for the same age group and it has that idea again of finding magic right on your doorstep.

14.   What kinds of adventures do you like having, when you're not writing about dragons?

I think I used to be more adventurous in practise than I am now - for example I don't get the urge to jump out of aeroplanes anymore! I am quite a home person and like going on adventures in my imagination. But I also love the sea and head to the coast whenever possible. So my adventures generally involve water, either wild swimming or messing about in boats.

But wherever I go I'm always having adventures, even if it's just walking down the lane or kayaking on the local lake. Because I'm always spotting faces in trees or wondering what would happen if that stone was an egg, or paddling away to an island that might have a phoenix nest on it.  I'm a firm believer that when you look after and grow your imagination, you can go on wonderful adventures whenever and wherever you like.