David grew up in London with various siblings and a selection of animals (the dog is probably worth a mention). His father was a sculptor and David would often gawp in wonderment at how faces would slowly emerge from blocks of wood, sheets of metal or bits of plastic. It took him a while to decide what he wanted to do with his pencils (he never stopped drawing), and for a period of time, back in the 1980’s, he worked as a cel-renderer and background artist in several animation studios.  By the mid 1990’s he began illustrating children’s books. In 2001 he wrote and illustrated the first of his own picture books, The Kiss That Missed, which was shortlisted for the Kate Greenaway award. He is probably best known for his Hugless Douglas series. To date he has created around 150 books in over 30 languages.

David lives in Oxfordshire with his wife and two teenage children.

Ruffles is a little dog with a big problem - he loves puddles, but hates his new coat.... We spoke with David Melling, the creator of Hugless Douglas and The Kiss that Missed, to find out more about Ruffles.

1.  What is your new picture book about?

Ruffles is about a small dog. He is a toddler, of course, so we look through those eyes at his first experiences. What makes him a little different from my previous picture books in this genre is that, although Ruffles is indeed a toddler, he is first and foremost a dog. This means striking the right balance between him looking very doggy, scaling right back on the anthropomorphism whilst making sure his daily adventures are firmly placed in young childhood.

2.  Was there a particular four- or two-legged creature who helped to inspire the story?

The idea was prompted by a random sketch of a small dog wearing a ruff, which is where he got his name of course. But developing the character and story may have been influenced, in part, by memories of my childhood dog, Charlie, a miniature schnauzer.

It's true to say that Ruffles had changed a lot from that initial first sketch to the final pages of the book. For me, the process of finding 'the look' comes from a lot of drawing. Pages and pages in the sketchbook of Ruffles from every angle interacting with different elements (insects, leaves, other dogs), with particular focus on body posture and facial expressions. It all adds into the mix that makes up his character and personality.

The first image of Ruffles, plus some early sketches

I love drawing stuff like that! I don't find it too hard to be honest. That's not to say I find it easy, or that I don't produce plenty of bad drawings…because I do. Plenty! The trick is to get past those into clear water, so to speak. Let's just say I certainly keep the waste bin well fed. But I know what I'm looking for when I'm drawing and once I get warmed up it's usually only a matter of time before I find the right rhythm and from which the 'better' drawings eventually appear. 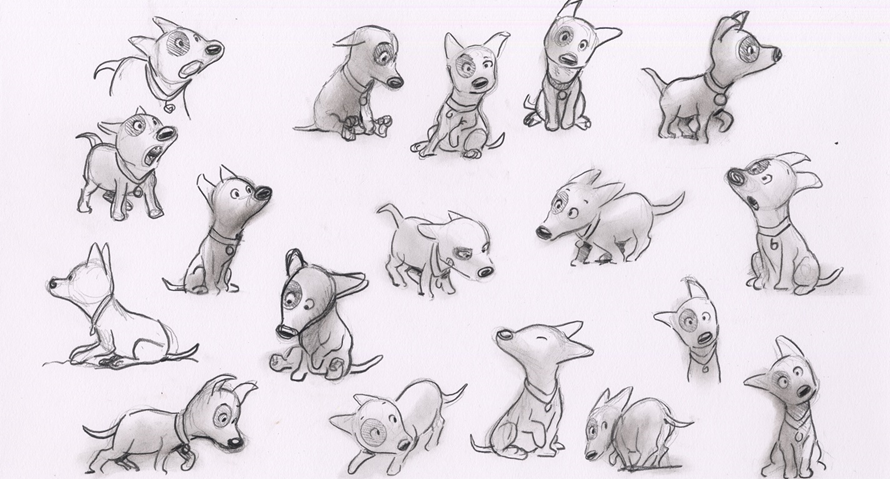 An example of  a 'character sheet' for Ruffles

5.  Do you doodle to help get ideas for the story, or do you write the text first?

I definitely draw first. Indeed, I notice I seem to draw for longer these days than I used to before I start writing. A few words and phrases can appear alongside certain sketches but on the whole, I find I have more or less worked out the narrative and probably produced around 80% of rough sketches before I close the sketchbook and begin writing a first draft.

6.  How do you create your images?

I usually start with a pencil and up until very recently, these will be traced onto watercolour paper, inked and coloured with watercolour. But for Ruffles, I was encouraged by Nosy Crow to look at Photoshop for the first time. I'd been considering it for a while but it was nice to have the support and encouragement from Nosy Crow to nudge me into actually doing it.

The beginning of the process hasn't changed, I still drew everything in pencil. But then I'd scan and drop them into Photoshop to clean up the line and add the colour digitally. The nice part about cleaning the lines digitally is that I could maintain the spontaneous nature of the sketchy line, which is often lost when having to trace a sketch onto watercolour paper then inking with a pen. So the artwork for Ruffle has been somewhat of a departure for me and I have to say, I've loved every minute.

7.  Do you have a favourite spread?

I quite like the 'No. No. No!' page, where Ruffles is desperately wriggling out of his coat. I had a lot of fun with that drawing sequence and feeling I had a break-through moment with understanding his personality…exactly how he feels about his red coat and just how prepared he is to rid himself of it! 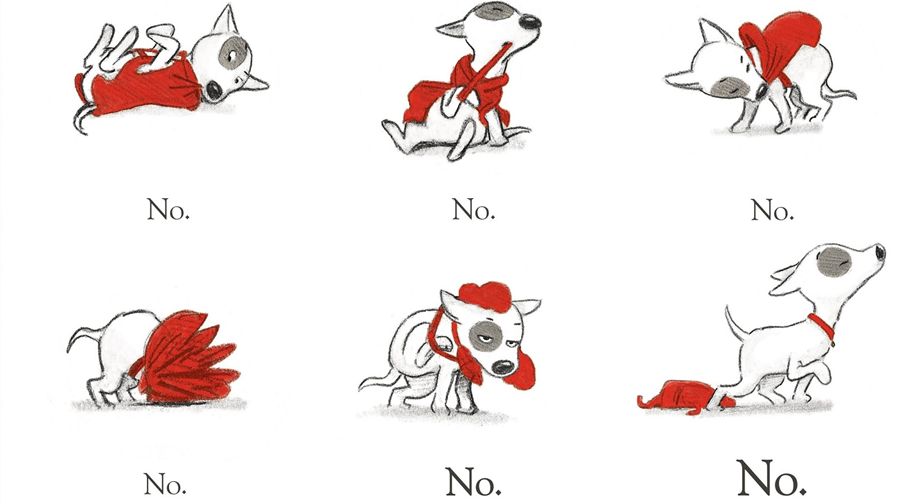 8.  Do you have more planned for Ruffles and Ruby?

Believe it or not I'm already working on Book 3 & 4 (Book 2 already done)! So far, Ruby hasn't appeared again but that's only because we wanted Ruffles to have a range of friends and, with each story being paired down to the simplest of elements, it was felt there hasn't been enough space for too complex a storyline involving multiple characters…to date! That said, Ruby has been mentioned in a zoom meeting recently so don't count her out quite yet!

9.  What are your top tips for children trying to draw animals?

I always think if you're happy with the face (and the eyes in particular), you can get away with a little bit more with the rest of your drawing. I always start with the face and eyes. If they're not right, I start again, but if legs and arms aren't right I might start again…but I might not of the face looks good!

If you're trying to add character to your picture, I think it helps to ask yourself questions as you're drawing; is it a 'he' or a 'she'…? Are they shy, cross, grumpy, sleepy etc? What does their voice sound like, how do they move/walk/run ie bouncy up-and-down steps or slow motion dragging-your-feet steps? All these little things can help with your approach and maybe influence the drawing.

As mentioned, I'm currently working on Ruffles 3 and 4. I do have another picture book project later in the year but no firm details on content yet.

I can work from home with a sketchbook on my lap…or out and about, but I'd say my most effective work space is my studio. I have a drawing board and chair set at the right angle and height and once I sit down, with the radio or a bit of music in the background, I can set to draw and be lost for hours.  As for the 'when': Well, I usually keep office hours 9-6-ish but that can vary greatly depending on all manner of deadlines, schedules and days when the drawing just doesn't go well!

12.  What are you most likely to be found doing when you're out the studio?

Going for walks (every day). Reading. I always have at least one book on the go….fiction and non fiction. And sketchbook drawing. I don't consider this 'work.' Oh, and when there isn't a global pandemic - I like to swim.