The Historical Association's Young Quills Awards is given to writers of historical fiction for children and young adults. This year's winners have been announced: 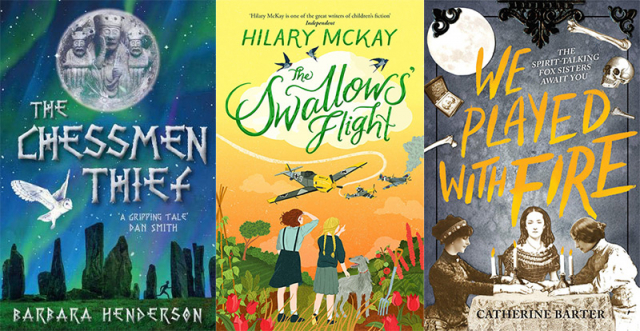 Barbara Henderson said, "I can't believe my luck, winning the Young Quills Award a second time - it's beyond what I could have imagined, especially considering the quality of the shortlist! Thanks so much to all the young readers and the judges! I live in the Highlands and my publishers are based on the Isle of Lewis, so I am especially proud that a book set mostly in Orkney and the Hebrides has, in some small way, put the North of Scotland on the story-map."

Hilary McKay said, "I am completely delighted to have won a Young Quills award. Looking at the wonderful books on the shortlist with The Swallows' Flight, I realise what an honour it is. I was particularly chuffed to hear that it was chosen by young readers. Thanks so much to all of them.

"An award coming from the Historical Association means a great deal to me. Even more than writing the story, I enjoyed the research. Lockdown interrupted me half way through, but the sublime British Library came (not for the first time) to my rescue. They had already found me every newspaper stocked in the second week of November 1938 in a Devon newsagents shop. Now, despite a level 4 lockdown, they managed to email me, amongst other things, vintage street maps of Berlin, and three separate articles on the pre-war price of rubies. Cherish your libraries, young readers! Never let them go."

Catherine Barter said, "I'm absolutely thrilled to have won this award for We Played With Fire! The story of the spirit-talking Fox sisters is not always taken seriously, but it was no coincidence that their antics - real or fake - took place against the backdrop of a turbulent, transitional period of American history. The Young Quills Awards are a wonderful celebration of historical fiction and I'm so grateful for their recognition of this book."

The Young Quills shortlist is created using the children's and young people's reviews of the books. Those reviews then also continue to assist the judges in their final deliberations. Tony Bradman - a previous Young Quills winner - was this year's guest judge.   Contact the Historical Association if you would like to apply to be a reviewing school.