She lives in London with her wife Karen, her dog Buffy and a creepy puppet that is probably cursed.

Trickster god Loki is forced to live on earth as a human child and must keep a diary to show how he's doing - and it's not going well....  In Loki: A Bad God's Guide to Taking the Blame, Loki is in the strange position of being blamed for something he didn't actually do - but can he put things to right and keep his newly-made friends?

Read a chapter from Loki: A Bad God's Guide to Being Good (Book 1)

Read a chapter from Loki: A Bad God's Guide to Taking the Blame (Book 2)

1.   You were previously a publisher - what brought you into writing your own stories?

I've always written, but taking the leap from working in publishing during the week and writing at the weekends? The pandemic gave me the spur I needed to do that. It made me realise that I could be creative at home. Previously, I'd always written in cafes. Also, it made me realise I wouldn't get lonely not having colleagues, because all of author Twitter are my colleagues.

2.   What was your introduction to Norse myths and why did you want to write books based on one of the gods?

I came to Norse myths via Tolkien, Wagner and Beowulf. But also reading children's books about them. I retold some Norse myths for an Usborne book when I worked there and that led me to read the original texts, which is when I knew I wanted to write about Loki.

3.   Which Norse god would you call on for help? Which one is best avoided?

None of them. They're a bunch of squabbling babies! But if I had to pick, I'd call on Heimdall. He's relatively reliable compared to the rest of them. I'd obviously avoid calling on Loki because you'd end up in worse trouble than whatever problem you were calling on him to solve.

I can't help loving Loki. I love tricksters generally, from Anansi to Puck in Midsummer Night's dream. Life is never boring around a trickster, even if it's unpleasant and uncomfortable!

5.   What happens in the books and the latest, Loki: A Bad God's Guide to Taking the Blame?

My books tell the story of the Norse god Loki in exile on earth, in the form of a mortal boy. It's his punishment from the boss god, Odin, for pulling one too many tricks on the other gods.

In Taking the Blame, Loki gets framed for a crime he didn't commit - stealing Thor's hammer. He has to solve the crime and discover who framed him - both to clear his name and to make sure Thor's mighty hammer doesn't fall into the wrong hands. It's also about friendship and what that means to Loki.

6.   What are the challenges in putting ancient gods in the bodies of mortal boys?

I did a lot of thinking about the details - for example, could Loki get sick and die in his mortal form (yes, in theory)? Would he be stronger than mortals (no)? Would he have his powers (yes, but forbidden from using them publicly)? I wanted to make sure there were limits on what the characters could do, but also I wanted to have fun with the fact that Loki DOES have powers (transforming into animals). Thor actually adjusts pretty well, although he misses fighting giants all the time.

Loki finds the limitations of mortal child life really really frustrating, as he HATES being told what to do, what to eat, and where to go. He does really love crisps though, so it's not all bad news. 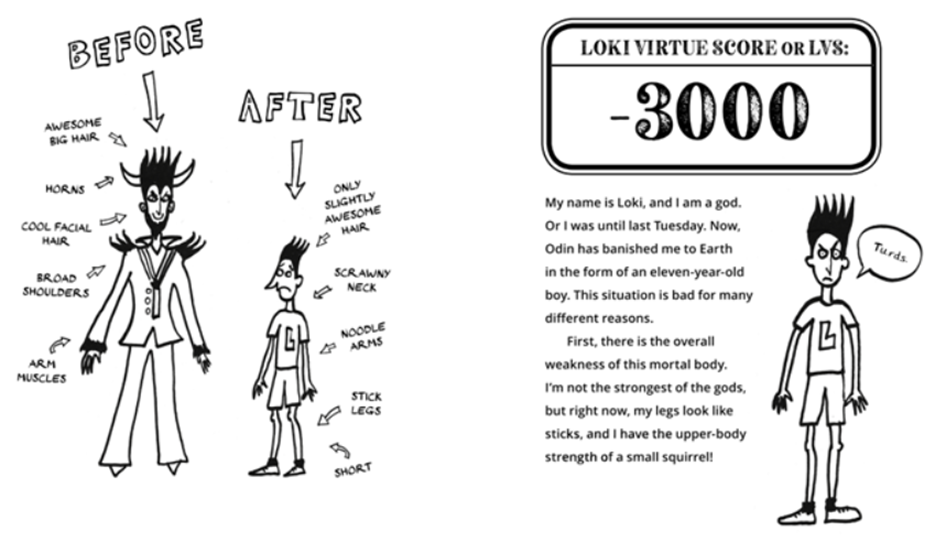 7.   What's your favourite moment in the book?

It's spoilery so I probably shouldn't describe it in detail....but it involves horses. Lots of horses.

8.   The Loki books are very funny - what about Loki makes you laugh the most? What is your favourite laugh-out-loud moment in the book?

I think the original material of the Norse myths is really funny in itself - Loki is a ridiculous character who has ridiculous things happen to him. I think Loki's lack of self-knowledge is what makes me laugh. He thinks he's so smart but he really doesn't know himself. That contrast between what the reader knows and what Loki knows offers a lot of comedy potential.

What's my favourite moment? I just flicked through the book to see what would make me laugh. Turns out it was a fart joke, because I am very mature.

9.   Do any of the supporting characters stand out for you?

I love Valerie and Georgina (Georgina's a new character in book 2). I love contrasting mortal characters without powers with gods and other supernatural beings. I like exploring what's valuable about being "just" human. Also, I love that both Valerie and Georgina have very fannish tendencies (about horses for both of them and aliens for Valerie). I love people who unashamedly care about things and don't try to be cool about it. 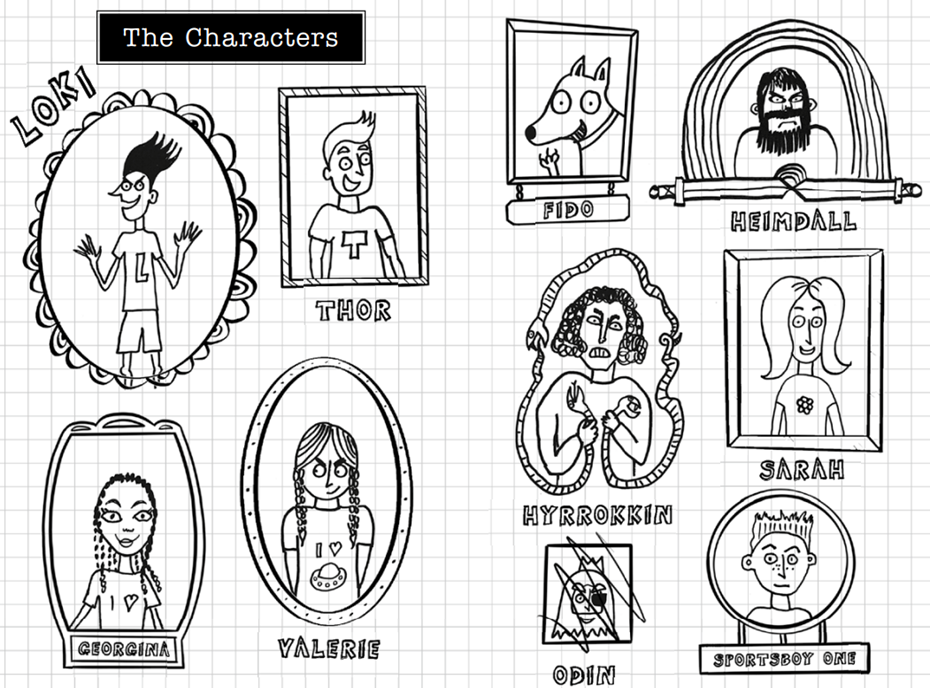 10.   You also create the illustrations for the book - they look simple, but how hard are they to create? What do you find most challenging to draw? (horses?)

Yup, horses. So obviously I decided to do a whole book about them. Generally I find drawing quite simple because I just have the one style and draw things however they turn out naturally. But some scenes and compositions become really tricky because I need to show unusual angles, or cram a lot of things into a small space! If in doubt, I add funny labels to make sure it's clear what stuff is.

In book 3, there's a school play, a new god (well, an old god, given all the gods are thousands of years old, but new to the books) and a very small pony. It's a slightly darker book than the others, but still full of very silly jokes.

I used to write in cafes but since the pandemic I've made myself an office at home. It has photographic wallpaper that makes it look like a forest, and I get a kick out of that. I don't have particular times I write best, but definitely not late at night. My brain switches off at about six pm.

My childhood dreams ranged from jazz musician (I play the trumpet) to lawyer (I was a big fan of A Few Good Men). Actually, there's an A Few Good Men reference in Loki. Bonus points if you can spot it. Though unfair on actual children because it came out long before they were born.

14.   If you were a writer in Asgard, what would your 'writer's shed' look like?

It would have a perfectly comfortable chair made of clouds, an infinitely-large desk with an infinite supply of pens (I'm always losing pens) and a mead horn that has coffee instead of mead in it. The walls would be made of leaves and there would be a wolf sitting at my feet.