The longlist for the 2023 Branford Boase Award has been announced. The annual Branford Boase Award celebrates the most promising book for seven-year-olds and upwards written by a first-time novelist and also highlights the importance of the editor in the development of new authors. 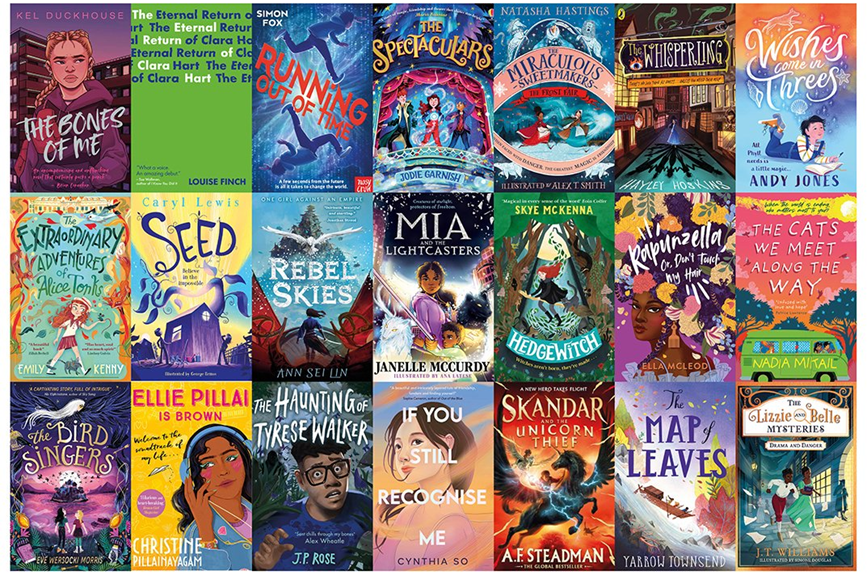 The longlist of 21 features fantasy novels, including bestseller Skandar and the Unicorn Thief by A.F. Steadman, edited by Ali Dougal; accomplished coming-of-age YA novels; a Georgian-era crime adventure; and The Extraordinary Adventures of Alice Tonks by Emily Kenny, edited by Katie Jennings, longlisted for the new Adrien Prize for novels giving a positive portrayal of a character with a disability.

The Henrietta Branford Writing Competition, the annual competition for young people which runs in conjunction with the Branford Boase Award, will open on Tuesday 7 February 2023.

The Bones of Me by Kel Duckhouse, edited by Harriet Birkinshaw (Flying Eye Books)

Running Out of Time by Simon Fox, edited by Tom Bonnick (Nosy Crow)

The Spectaculars by Jodie Garnish, edited by Becky Walker and Alice Moloney (Usborne)

The Whisperling by Hayley Hoskins, edited by Katie Sinfield (Puffin)

The Extraordinary Adventures of Alice Tonks by Emily Kenny, edited by Katie Jennings (Rock the Boat)

Mia and the Lightcasters by Janelle McCurdy, edited by Leah Thaxton (Faber)

The Cats We Meet Along the Way by Nadia Mikail, edited by Bella Pearson (Guppy Books)

If You Still Recognise Me by Cynthia So, edited by Mattie Whitehead (Little Tiger)

Skandar and the Unicorn Thief by A.F. Steadman, edited by Ali Dougal (Simon and Schuster)

The Map of Leaves by Yarrow Townsend, edited by Rachel Leyshon (Chicken House)

The Lizzie and Belle Mysteries by J.T. Williams, edited by Liz Bankes and Aleena Hasan (Farshore)

Chair of the judges and co-founder of the Branford Boase Award, Julia Eccleshare says, "The Branford Boase Award highlights the most exciting new authors for children, but it also reflects the current complexion of literature for young people. We are excited that this year's longlist includes such a wide variety of voices, of subjects and themes, representing contemporary children's publishing at its best."

This year's judges are Maisie Chan, author and winner of the 2022 Branford Boase Award; critic Joanne Owen; Darren Matthews, Primary Advisory Teacher at the Centre for Literacy in Primary Education; and Sajeda Amir, English teacher and KS3 coordinator at Levenshulme High School, Manchester. The judging panel will be chaired by Julia Eccleshare, children's director of the Hay Festival.

The Branford Boase Award is delivered in partnership with the Authors' Licensing and Collecting Society (ALCS) and supported by Walker Books.